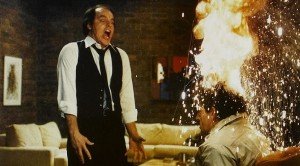 While there’s no denying the influence on cinema of classic films such as Casablanca, Citizen Kane and Psycho, there’s plenty of praise that should be directed towards three horror movies from 1981 that, as far as I’m concerned, led to the explosion in the VHS market, which subsequently fired up the passion for home entertainment that has led us to the current golden age for home cinema enthusiasts. The Thing still features some of the best practical effects ever committed to film, and people who saw the movie wanted to rewatch it and soak up those unbelievable sights again and again. An American Werewolf In London came a close second with the best werewolf transformation sequence ever. And then there was Scanners, the weakest of the three, but the one featuring the most rewindable and rewatchable moment for horror movie fans acclimatising to the home video boom.

As a child of the ’80s (I was born in 1975 so was privileged to spend a lot of time in my childhood getting to see movies on video that I really shouldn’t have been able to see at such a young age), I have a special love for all of these movies and many of the directors that I discovered at a young age (Carpenter, Landis, Raimi, Cronenberg, etc.) have remained real favourites throughout the years. While Scanners may be a rough, flawed film, writer-director David Cronenberg has continually kept himself relevant and ahead of the game in a way that none of the others have managed. Scanners was, arguably, the movie that launched him to another level and, as such, remains essential viewing.

The story is pretty simple. A number of people in society have been able to exhibit extraordinary psychic powers. Those people are called scanners. Stephen Lack plays Cameron Vale, a young man struggling to control his power until he is taken in and helped by Dr. Paul Ruth (Patrick McGoohan). Dr. Ruth, however, is not being completely selfless. He believes that a scanner named Darryl Revok (Michael Ironside) is far too dangerous and must be stopped. He wants Cameron to go undercover, to find where Revok is and to do whatever needs done to stop him.

Full of strange, eerie moments and (considering the obviously limited budget) genuinely impressive set-pieces, Scanners also has a good helping of social commentary in there. The scanners can be controlled by a drug called Ephemerol, but the potential use of the drug on non-scanners immediately calls to mind the life-changing, indeed generation-affecting, consequences of Thalidomide, used in the late ’50s through to the early ’60s.

It’s a shame that the acting isn’t on a par with the intelligence of the script and the special effects work. Stephen Lack just never convinces during any scenes that require him to deliver dialogue. He’s okay at making the faces required to show him in scanning mode, but the rest of his performance really drags the film down. Luckily, Michael Ironside has one of his best roles, and is superb. Jennifer O’Neill isn’t too bad, as a woman who might be able to help Cameron in his quest, Patrick McGoohan does okay and Lawrence Dane is quite enjoyable as Braedon Keller, a man who fails to see why the good doctor continues to have faith in his idea of using a scanner to catch a scanner.

Cronenberg, as usual, seems to be most at ease with the impressive scenes that show some major trauma to various body parts. It may not be as constantly visceral as the other “body horror” movies from this stage in his career, but fans can rest easy as there are still plenty of nasty, bloody and wince-inducing moments throughout. Not to mention a finale that really delivers the goods for gorehounds.

Scanners remains both an enjoyable horror movie and an interesting “tipping-point” – after this movie Cronenberg would create what many see as his best film, Videodrome, before proving himself capable of some more accessible work in the shape of The Dead Zone and The Fly, both of which were great successes. I encourage any fans who have somehow missed this one so far to check it out immediately. 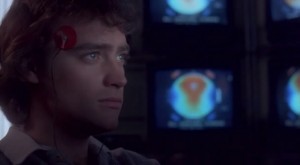 And here we go again with yet another sequel for a movie that never needed one. Shot back-to-back, I believe, with Scanners III, this film may be a very low-budget affair, but it’s also not actually that bad. Indeed, compared to the many sequels that now turn up as products of the Syfy Channel, this film is a veritable modern classic.

The plot this time around concerns a scanner named David Kellum (played by David Hewlett) who ends up working for Commander John Forrester (Yvan Ponton) and seemingly putting the world to rights. He starts off by helping catch someone who has been putting strychnine in milk containers, but then he ends up being used to put Forrester in a position that gives him even more power and influence. Feeling pretty conflicted about the situation, to say the least, David decides to go into hiding and get away from Forrester. He leaves his girlfriend (Alice Leonardo, played by Isabelle Mejias) and goes to visit his parents, who end up telling him that he wasn’t actually an only child. One trail of death and destruction later, thanks to a “trigger-happy” scanner named Peter Drak, David meets his sister, Julie (Deborah Raffin), and tries to enlist her help as he fights to clear his smeared name and the people that are all being put in danger by Forrester’s grand plan.

Essentially hitting many of the same beats as the first film, this sequel is happy to unfold as a pale imitation (with a connection to the first film that seems laughable, but actually isn’t THAT bad an idea) while also trying to deliver the basic goods for fans – shuddering faces, people being manipulated, some traumatic psychic abuse.

Director Christian Duguay may not be half as talented as Cronenberg, but he does a solid job with the script by B. J. Nelson. He also may not have a mighty Michael Ironside to work with, but Raoul Trujillo does his best to be over the top and enjoyably villainous for every moment that he’s onscreen as Peter Drak. Yvan Ponton is also a fun baddie, though in a different way, and Hewlett is a slightly bland, but decent, potential hero. Deborah Raffin and Isabelle Mejias are both perfectly fine as the main women in David’s life.

The Scanners movies work best when the characters get to scan, or be scanned. Thankfully, Nelson and Duguay remember this just often enough to keep the movie from becoming a dull waste of time. It’s not a terrible movie, it’s just one that was obviously made cheap and can’t hide that fact. 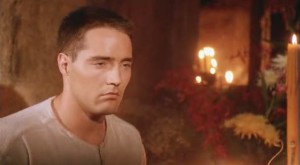 And so we come to the third, and final, film in the Scanners trilogy (although fans of the concept may want to check out the Scanner Cop movies, neither of which I have seen or am willing to vouch for). A film that takes everything that’s great about the Cronenberg movie and turns it into a comedic blend of Dallas and Network. It’s not good.

Liliana Komorowska plays the featured scanner this time around, a young woman named Helena Monet who finds her lot in life being improved after her father, Dr. Elton Monet (Colin Fox), invents a small gadget that helps keep headaches at bay and generally ease the side-effects that can accompany scanner abilities. Unfortunately, the gadget hasn’t been fully tested, but Helena makes use of it anyway. When will people learn not to just jump in and make use of untested medicines/treatments? Helena soon starts acting as if she has no conscience and people soon start dying. Meanwhile, Helena’s brother, Alex (Steve Parrish), is in a self-imposed exile after accidentally killing his friend while performing a party trick, but he might just be the one person who can stop his sister as she uses her powers to quickly move up in the business world and gain control of a television station that she can then use to control everyone. Oh, I may have forgotten to mention that, the gadget also allows Helena to manipulate people through electronic equipment, which means that the televised image of Helena could be very, very dangerous indeed.

The second Scanners movie may have been a cheap, but mildly enjoyable, affair unable to get out from under the shadow of the superb first movie. This film doesn’t even try. That would be all well and good if it went off in a different direction that felt daring and thought-provoking, but this doesn’t do that. Even the one idea that feels as if it could be something new simply harks back to a key moment in the first movie. Director Christian Duguay and writer B. J. Nelson both stay on after working on the second movie together, but they are joined by writers Julie Richard and David Preston. Considering just how far this falls from even the simple pleasures of the second movie, it’s tempting to blame those two new writers, rightly or wrongly.

Liliana Komorowska is a beautiful leading lady, but not so blessed in the acting department. Her performance is all ridiculous gurning and eye-widening while people around her act laughably oblivious to the fact that someone in their midst is being psychically manipulate. Steve Parrish is a bit too bland to make an effective potential hero and he’s given an equally bland love interest in the shape of Valerie Valois (who plays Joyce Stone). Peter Wight (billed as Peter Wright) makes the strongest impression, mainly thanks to an embarrassing sequence in which he is humiliated in the middle of an important business meeting by being forced to do a ridiculous dance.

Some moments are unintentionally hilarious, as you may have guessed, but the film doesn’t have enough to make it a very real “so bad it’s good” which just makes it bad. Obviously. A poor end to an ill-conceived trilogy.

The Scanners trilogy gets a nice Blu-ray release here in the UK on Monday 8th April. None of these movies look superb, but the first movie looks surprisingly sharp for its age. The sound is okay, subtitles are available and the first film is served up with a selection of interviews (actors Stephen Lack and Lawrence Dane, Cinematographer Mark Irwin, Executive Producer Pierre David and Makeup Effects Artist Stephen Dupuis). The movies deserve more, even the sequels (I’d be interested in hearing the behind the scenes stuff that went on), but sometimes you have to take what you can get.