Written and directed by Ciaran Foy, who previously gave viewers a number of enjoyable shorts including The Faeries Of Blackheath Woods (available to view here), Citadel is a horror movie that just never manages to fulfil its full potential, despite a couple of great ideas mixed into the central premise.

Aneurin Barnard plays Tommy, a young man traumatised at the very beginning of the movie as he sees his pregnant partner attacked by some savage hoodies. Some time after this incident, Tommy is looking after his new daughter on his own. He’s agoraphobic, and with good reason. Those hoodie horrors are still out there, still causing fear and death and still, for some reason, circling close to Tommy, despite the fact that he no longer lives in the tower block where he first saw them. When he meets an angry priest (James Cosmo, simply credited as Priest), Tommy finally finds someone who knows more about the situation and doesn’t accuse him of being overly paranoid. Of course, that doesn’t mean that he’s going to help either. Can Tommy protect his daughter and stop living in fear? It all depends on what the priest reveals, and whether or not they can both face what has to be done. 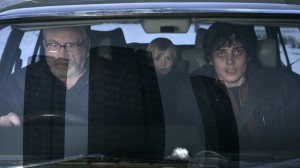 As mentioned in the opening paragraph, there are a couple of good ideas in Citadel, with the feral hoodie kids being enjoyably fierce villains. The fact that the message of the movie seems to be “there is nothing to fear but fear itself” is also an enjoyable factor, well executed within the final third of the film. Foy certainly does a competent job with his script and direction, it’s just a shame that he leaves the first half of the movie full of scenes that feel slightly disconnected from one another.  Some elements are tied together, as you’d expect, in the third act, but some are just left there, disparate moments in a movie that feels ever so slightly flabby and lacking cohesion, despite a runtime of just over 80 minutes. 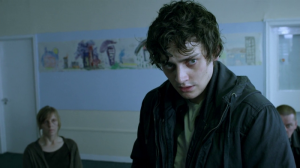 The acting is a big plus for the movie. Foy really did himself a favour by getting Cosmo for the vengeful Priest and Barnard for the role of Tommy. The former may be known for consistent greatness, but it’s the latter actor who carries the film with a fantastic performance from start to finish. We only see Tommy happy for a minute or two, with the rest of the film showins a man living in fear of almost everything around him, but he never seems annoyingly weak or over the top in his wish to avoid the outside world. Jake Wilson is also consistently good as Danny, the blind son of Priest, who may be their best asset as they set out to destroy the baddies. 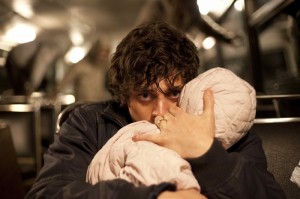 It’s not a bad film, certainly worth a watch for something a bit different from the norm, but it could have been much better.

Citadel comes out on DVD here on Monday 30th September.