by Aly Lalji
in Film Review

Every film, whether it’s mainstream, blockbuster or independent must carry a vital theme and moral to walk away with. After viewing the independent film The Conversations, shot on a tiny budget, the viewer will become enticed and walk away with much to peruse. From a subjective conjecture, the overall theme is sad but true. That theme comes from Aristotle’s famous quote which is: ‘No excellent soul is exempt from a mixture of madness.’ Everyone can result to madness, be it under stress, torment, but in the case of the film, a breakup with a girl who the protagonist is besotted with. 95% of men, as in the average Joe will be lucky enough to befriend an extremely attractive girl that is way out of their league. The process of that friendship is to hang out, have nice meals together and become emotionally attached and eventually fall head over heels for them. When the word ‘platonic’ is revealed as a rule in the relationship, it will be the worse word in the world, but our protagonist endures it. However when the lady says she’s leaving the country, a natural response will be to lose the plot and suffer a mental breakdown. All the aforementioned statements will occur in this excellent gem of a film.

The premise is straightforward but challenges the audience in a good way to break up the linear narrative, scattering it all over, which metaphorically accentuates mental illness to not be straight forward but more rather one’s mind and madness is all over the place. Ali Nawaab, a troubled dentist wannabe stand-up comedian played by newcomer Haider Zafar embarks a psychological breakdown after the girl of his dreams has to return back to America. Everyone can empathise with Ali when a girl that spectacular has let him down after latching onto his heart and resulting in his breakdown. A good comparison to The Conversations is Eternal Sunshine of the Spotless Mind. Just like Jim Carrey’s character, Ali engages in madcap attempts to erase the memories of his blonde American muse, Ellie Goldsmith (Daniella Down). He delves into the psyche of a blossoming depression. For anyone that has been in love, they will apprehend that love can really be that maddening. 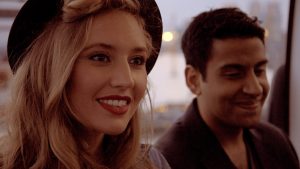 As we watch Ali have conversations with his imaginary devil and angel friends, the audience become engrossed with whom he sides with more and what advice he will accept. We then question, will listening to the darker side lead him to worse things to come? The film is powerful due to the fact that it is original and something we don’t often see. Everyone has a dream; in this case, Ali’s dream of being a stand-up comedian is fun to watch. When he engages in his stand up, the audience begin to admire him as he uses his strengths of comedy by expressing his weakness of lacking in love. Even better, the audience become more challenged as they will question themselves, was Ali performing the stand-up comedy for real? Or in his imagination, considering his mental illness?

Overall The Conversations is definitely worth watching. Marcus Flemmings directorial/writing feature must be commended as he knows what he wants from his actors. Most essentially he sets the tone to be comedic, obscure and dabs it with a twist of romanticism. This low budget film will hopefully help evolve this new array of talent to bigger and bolder projects. Daniella Downs is also one to look out for as she plays the love interest of Ali perfectly. We cannot always follow the wise words of wisdom, ‘Never chase the people who hurt you, replace them with the people who care,’ especially with the character of Ellie. The audience will become infatuated with her just as much as Ali, but if you can commiserate with the protagonist, surely that alone is the most powerful element of film.