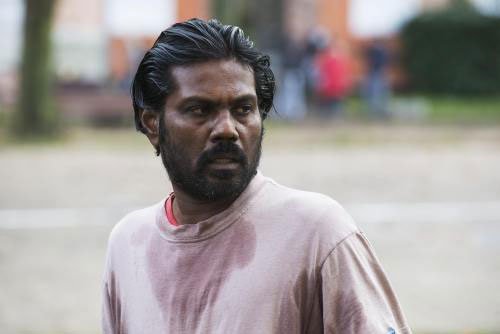 As Ron Perlman once put it, war never changes, a sentiment that makes it tricky to move on for anyone forced into conflict. In Jacques Audiard’s drama, equal parts sweet and painful, he tracks the immigrant story of a Tamil Tiger fighter and his family who come ashore in France from Sri Lanka. Attempting to build a new life for themselves, they find shaking off the past to be a herculean task.

To call them a family is not strictly accurate. When the film starts, Dheepan (Jesuthasan Antonythasan) has never met Yalini (Kalieaswari Srinivasan) or Illayaal (Claudine Vinasithamby), soon to become his wife and daughter. None of them have met before. Figuring they have a better chance of escaping as a family on a dead person’s papers, they buckle up together to be shipped to France.

The strongest moments occur as the makeshift family wash up in a rough estate where Dheepan is made caretaker, Yalini cares for an old man, and their pretend daughter returns to school. Audiard’s screenplay, co-written with Noé Debré and Thomas Bidegain crafts a beautiful humanist love letter to new beginnings. From the brutal Civil War in the north of Sri Lanka to selling cheap tat on the streets, and eventually a proper life together, Dheepan is shot through with grounded authenticity. Little details make the whole. When interviewed by French officials, their attempts to give stock answers are gently corrected by the translator. On the job, they run into confusion over the correct order of names in French, and can’t stifle astonishment at a cleaning position paying 500 Euros a month.

As layers build padding out their lives, the make believe family edges towards a real one. Briefly holding hands at the table, Yalini tells her ‘husband’ how nice it is to talk. Illayaal, after a rough start, improves in school and begins to think of the other two as her parents. Sexual attraction creeps in. Grabbing anxious glances as she dries off from the shower, Dheepan can’t hide nervous desire. When they finally sleep together, Audiard stages it gorgeously, a naked Yalini leading him into the bedroom before it all fades to black.

The idyll can’t last forever. Two dark clouds hover over their lives. The first is the emergence of Dheepan’s old military commander who wants to drag him into a life of crime to support comrades back home. Attempting to refuse, he’s beaten to the ground reviving suppressed memories. Dheepan’s descent into the past, a past that claimed the lives of his military unit, wife and kids, comes at a terrible time. Always a dangerous estate, shooting breaks out around the apartment Yalini works in, unfortunately also the base of operations for the local drug trade. An uneven tonal shift launches the family in multiple directions at once, culminating in a burst of bloody violence that’s as out of place as it is impeccably handled.

Everything Audiard does is impeccably handled. Directed tightly and driven forward by compelling performances, he reaches into his box of tricks at just the right times. A number of scenes end with soft fades, music soaring across the blank screen. Occasionally, images of Sri Lanka steal in, the camera floating across a peaceful elephant. Even when it develops awkwardly into a Raid style smash-em-up, Audiard throws smoke and shadows across the frame to mirror the fear and rage reopening in Dheepan.

After a quiet start to his career, Audiard has been on an international role since The Beat That My Heart Skipped in 2005. Marking the fourth bullseye in a row, Dheepan merges a sweet tale of acceptance with a haunting flight from a war that won’t leave them behind. Minus the needlessly energetic finale, he shows escaping the past comes at a cost, but it’s one that can be met.