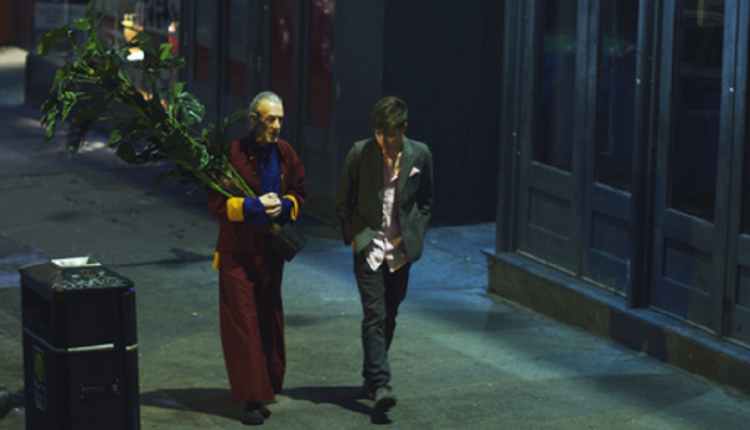 David Sillars, who also co-wrote the screenplay with director Henry Coombes, plays an aged, gay man named Albert who also happens to be quite good at psychotherapy. His latest patient is the grandon of a friend. He is named Ben (Jonathan Leslie) and also happens to be gay, which may enable Albert to understand him better than some other psychotherapists. Or maybe Albert and his unconventional methods will just cause Ben a lot of unnecessary hassle that he’d rather avoid.

Exploring sexuality, communication, self-doubt, and much more, Seat In Shadow is a film that uses every scene to connect inner space and outer space in a way that is enjoyably cerebral without ever feeling too smug. The script is bubbling with fun lines and exchanges, and the camerawork moves between impressive imagery, such as a houseplant turned into a jungle terrain, or a jar of dirty water, being used to clean paintbrushes, depicted as something akin to a micro-universe in turmoil.

Other people appear throughout the movie, yes, but this often feels like a two-hander, mainly because that central relationship is so important as Albert tries to help Ben, and also has to spend some time helping himself too. Which is why the therapist, himself a work in progress who ar least has the self-awareness to dissect and deal with his flaws, is more interesting than the patient. Whether he’s reacting to some cutting insults with a weary grin, or heading into a disco with a large plant to dance with, Albert is always the main reason to keep watching. He’s a fantastic creation.

While it is undeniably funny and smart throughout, Seat In Shadow is sadly undone by some artificiality in the main performances. That doesn’t mean that every scene feels worse because of it, but it does stop the film being as good as it could be. It’s hard to know if the performance problems come from Sillars, Leslie and co. or if director Coombes, working here on his debut feature, needs to work on his methods of instructing cast members. If it’s the latter then I just hope that he makes a bit of progress with each future release.

Much like the character of Albert, this is an incisive, rough, flawed piece of work. Worth a watch, even if it’s not one that you’ll want to revisit (unless you do).