Gary Frank plays Barry, an insurance salesman who desperately needs to get his life back on track, in this action thriller, one of the truly neglected gems of the 1980s.

Barry needs just one good commission to help him put things right, a commission that he’s so desperate for he ends up in an apartment building after dark that doesn’t have the best reputation when it comes to how visitors are treated. The building is ruled by a gang named The Vampires, led by Tony Todd in an early, charismatic turn, and when Barry makes the mistake of putting his hands on one of the younger members of the gang he ends up, unbeknownst to him, signing his own death warrant. He gets the signature that he needs, but getting out of the building is another thing altogether. Thankfully, he is helped by the woman who just paid out a lot of money for her life insurance (Frances Foster), her granddaughter (Stacey Dash) and the good-hearted Will (Ray Parker Jr.), a telephone engineer just visiting the building to check the phone lines and also spend some time with his girlfriend. If they can get to the apartment of a paranoid Vietnam veteran named Parker (Jan-Michael Vincent) then they might just stand a chance. 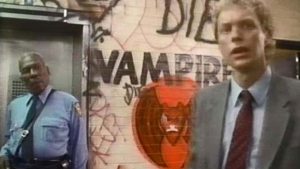 Written by Stuart Kaminsky and Bobby Liddell, this is, essentially, a “Die Hard in a . . . . . ” movie before Die Hard had even come along to create that particular sub-genre. The script may not be full of great dialogue, but it’s surprisingly good in many ways. Characters are quickly sketched out, motives are made clear and the plot develops in a logical, yet still highly entertaining, way. Peter Manoogian works well with the material, managing to distract viewers from the relatively low budget with memorable characters and one entertaining moment after the next.

Gary Frank isn’t the best leading man, but that’s not the worst thing in this instance, considering how passive his character is, as others with more street smarts make some decisions that help  him to stay alive. It’s hard to watch Ray Parker Jr. without thinking “that’s the guy who sang the Ghostbusters song” but he does okay in his role. Frances Foster and Stacey Dash, however, both do much better. Jan-Michael Vincent is a lot of fun, playing a character who seems to have barged in from another movie, but playing him to great effect, and Todd is rarely less than mesmerising whenever he’s onscreen. He may have accumulated a number of decent roles in the decades after this movie, but The Count still ranks as one of his most memorable characters.

A film ripe for rediscovery and reappraisal, especially in the light of more recent cinematic treats The Raid and Dredd, Enemy Territory has not yet received any disc release of note. Fans of the film, or those wanting to check it out for the first time, can find it easily enough, but this is a little film that deserves a lot of love from a company willing to promote it to a whole new potential audience. So, if you know anyone who might be interested *cough* Arrow Video *cough* then do be sure to pass along your feelings whenever the opportunity arises.