Fatal Attraction, it’s the movie that gave us the term “bunny boiler” and it’s a slick thriller for adults. Or, at least, that’s how it seems on the surface. When you start to probe the appeal, and the different aspects, of Fatal Attraction it soon becomes clear that this is unpleasant, unpalatable stuff, packaged for the masses with a couple of decent stars to distract from the more unsavoury elements. I don’t have the time, or inclination, to go TOO much in-depth here, but there’s plenty that can be explored and dissected for those who watch the film with a more critical eye. 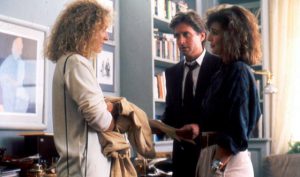 Michael Douglas plays Dan Gallagher, a successful man who has everything he needs, a lovely wife and child, a good job and good friends. Unfortunately, he jeopardises all of that when he decides to have a one night stand with Alex Forrest (Glenn Close). In the cold, harsh light of day, Dan and Alex both seem to know that Dan can’t make the same mistake twice. He loves his wife and daughter very much. It turns out, however, that Alex doesn’t see why she should give up Dan, and she soon starts making that very clear. 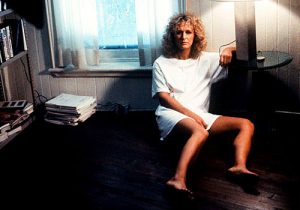 I have many problems with Fatal Attraction, many, but there’s no denying that it’s an enjoyable piece of entertainment that tries to cover up its weaknesses with some solid lead performances and memorable set-pieces. But my biggest problem with this movie, and I risk having rotten veg thrown at me here, is the fact that Douglas is attracted to Close in the first place. This is a film about sexual attraction, about lust, and while Close may have a raw, lusty nature to her character that appeals to some men, few could argue that Anne Archer (who plays Mrs. Gallagher) isn’t quite a bit more beautiful. Is writer James Dearden, and/or director Adrian Lyne, saying that women start to become less desirable once they’ve settled into the role of mother? Well, that’s one can of worms that they open up, but I’m happy just to say that Archer is beautiful, and I’ve never seen the appeal of Close, with all due respect.

Both Lyne and Dearden do a great job when it comes to the mechanics of the thing. The movie is well put together, the camerawork is smooth and steady, and the danger builds steadily to a crescendo of a third act. The foundation of the whole thing may be highly flawed, but this is a solid construction. 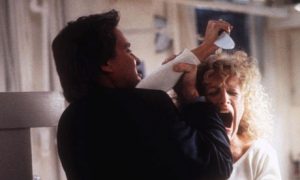 The cast all do well. Douglas is great in this kind of role, he can keep you on his side even while being quite the morally bankrupt sonofabitch (a persona cultivated onscreen over this decade that was inverted to good effect in the so-so Disclosure). Close is also very good, but she’s completely over the top and twitchy as soon as her “baddie” status is established. This helps to stop people thinking about just how rotten Douglas is, because he can’t be THAT bad when he’s the one suddenly being victimised (right??), but it quickly takes her character far away from any level of believability, although we’ve all heard tales, and perhaps experienced, people who have gone to similiar lengths to reclaim a partner. Archer may have the more thankless role, but she does well with it, her character remaining the most sympathetic even if she takes a ridiculous amount of time to notice strange things going on. 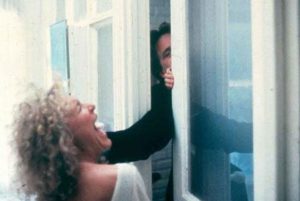 This is good stuff, in terms of the entertainment factor, but it’s a shame that so many decisions were made to simply keep everyone distracted as the events played out. If you want to see just how different things could, and perhaps should, have been then it’s well worth checking out the infamous “alternate ending” (which still isn’t dark enough, in my opinion) and taking the time to think about who displays the worst behaviour in the first half of the film.

An interview with Adrian Vitoria