Treading very similiar ground, but doing things in a very different style, to The Brothers Grimm, all you need to know about this movie is laid out during the opening credits. MTV Films is listed among the production companies. It’s a movie aimed at teenagers. It also happens to be a rollicking good time. 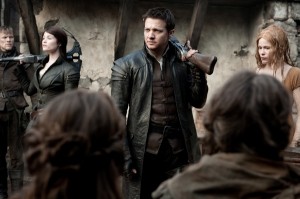 The story begins with a telling of the classic tale. Young Hansel and Gretel end up in the home of a witch and the end looks near. Thankfully, they turn the tables and kick the witch into the fire. That’s only a detail that I would consider a spoiler if you’re reading this before you’ve turned four years old. Everyone knows, or everyone should know, the classic fairy tales and Hansel & Gretel is up there with the best of them.
We then move forward some years and join the grown up Hansel (Jeremy Renner) and Gretel (Gemma Arterton) as they move from village to village, destroying witches and making the world a safer place for the inhabitants of the land. It’s not long, of course, until they meet their match in the form of an extra-nasty and extra-powerful witch (Famke Janssen) who has a plan requiring the blood of a dozen kidnapped children. 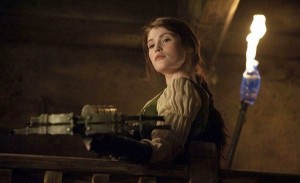 Written and directed by Tommy Wirkola, this isn’t a film that pretends to be big and/or clever. It’s an action movie, with plenty of supernatural elements and some fantastic character design (all of the witches onscreen are great), that requires nothing more from its two stars than to have them look attractive and able to kick ass. Renner and Arterton are both more than capable of doing that, and so help to make the film an enjoyable experience. In the role of the main villain, Janssen is equally capable. She’s not the best actress in the world, but I like her a lot. Sometimes that’s all I can say. Peter Stormare pops up in a role that I could only view as . . . . . . . . . an excuse to get him in there and further remind people of The Brothers Grimm. Or maybe he just REALLY likes movies based on fairytales. Pihla Viitala plays a lady who takes a shine to Hansel and Thomas Mann is enjoyable as a young man who thinks that the witch hunter life is for him. Oh, and Derek Mears is a troll. An actual troll, as opposed to anyone who may sign up here just to inform me that “THIS REVIEW SUX!” 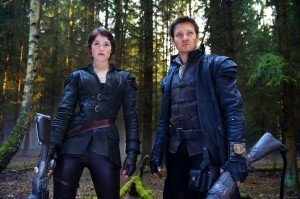 The movie may not score points for originality – the whole twisted fairytale idea has been done plenty of times over the years, though it’s always something I enjoy seeing – but it does score points when it comes to the creature design and fight choreography. Unfortunately, some jittery camerawork may put people off the latter, but the various physical traits of the witches are very well done and I’m a sucker for fight scenes that mix the firmly physical with some supernatural powers. 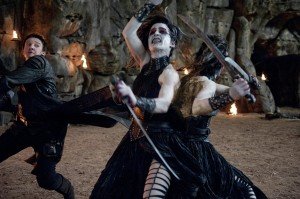 People will roll their eyes and write this one off before seeing it, but anyone who checks it out might find themselves having a hell of a good time. It’s very much horror-lite, but it’s very entertaining and nicely detailed horror-lite. Which makes a big difference.