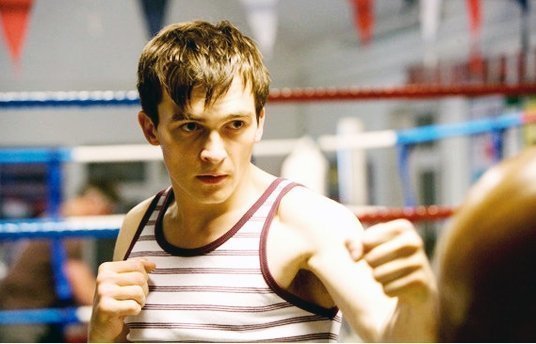 Based on the autobiographies/memoirs of Kevin Lewis, this movie chronicles a life of an abuse victim. Abuse that comes from many different directions (including, in one way, from himself). It’s directed by Nick Moran (still best known to many for his cheekily charming Cockney wide boy act in Guy Ritchie’s feature debut), features a fantastic cast (including an almost unrecognisable Natasha McElhone) and somehow manages to take you from the very depths of the gutter to the edge of the sun as it plays out from start to finish.

Things begin with a young man, beaten and bleeding, thrown out of the back of a van. He manages to get himself to a dirty mattress in a dirty room and begins downing pills and alcohol. Unbelievably, things get bleak before they get better. While waiting for the death he so longs for, the young man remembers his childhood years of abuse that led him to the events of his young adulthood that led him, eventually, to just exactly where he is.

There’s something strange about The Kid, something just so great about the way everything is handled that it makes the familiar material feel a little bit fresher. There were a number of occasions when it looked as if it had heaped on too much for the audience to endure but it always just managed to let in that one little ray of sunshine to help people get through the whole thing.
The script is okay, it’s well-structured to keep those unfamiliar with the story (like myself) guessing as to how everything will turn out and there are one or two great lines here and there but nothing I can imagine people quoting years down the line. It’s simply not that kind of film.

Moran directs competently enough, using a good soundtrack to accompany the time period from the 80s to the 90s and simply filling the screen with enough talent to carry the material. That talent includes McElhone (already mentioned), Rupert Friend, Ralph Brown, Ioan Gruffudd, Bernard Hill, David O’Hara and James Fox . Everyone is fantastic, although O’Hara should have been left to his own accent. Even Tom Burke impresses, making you forget all about his part in the pretty godawful Donkey Punch.

Some people will be very upset by this movie, others may think it’s simply bleak and emotionally manipulative. It definitely affected me and I hope it affects others in the same way. The first half of the movie struck a chord with me, I have known kids eventually pulled into the social work system and have seen, first hand, how that system has failed them at times and how it’s one full of good intentions but not always able to put them into practice. Perhaps that means I put a lot of my own memories into the viewing experience but I couldn’t have been the only one. At the end of the screening I was at a few audience members started applauding, loudly and spontaneously. So I assume it affected them, too.

The Kid is out in UK cinemas 17th September.

The Imaginarium of Doctor Parnassus (2009)