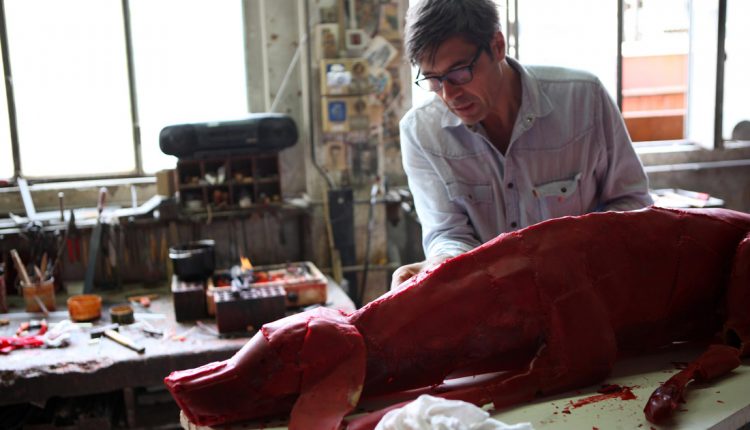 There is a Canadian television series which began in 2001 called How It’s Made, in each episode of which we follow the manufacturing process, step by detailed step, of hundreds of disparate every-day items. The processes involved are almost always completed using the latest in robotic and machine technology. It is the transformation from base stuffs to final product that is the most fascinating part though, watching as each new element of the finished product becomes discernible, how form and its attendant potential use is shaped with each new stage. I often wondered, watching How It’s Made, how objects were created before these machines and robots even existed.

Hand Gestures (Il gesto delle mani) is the debut documentary from Italian filmmaker Francesco Clerici, and it answers the above question profoundly. Filmed over the course of one complete project at the prestigious, one hundred year old Fonderia Artistica Battaglia in Italy, we are shown over the course of the film’s 77 minutes that machinery and technology are anathema to the artistic traditions and customs that have remained unchanged from the 4th Century BC.

Filmed in a quiet, often motionless observational style, we follow every aspect of the creation of a bronze dog using the ancient lost-wax casting technique in exquisite detail. There is no narration, no explanatory captions, very little dialogue – often all we can here is the muffled voices and music of others in the foundry and the wonderfully detailed sounds of the work in progress. There is a practised unspoken collaboration at play in the foundry which tells of, not only craftsman of the highest order, but an historical adherence to the principles of creation and understanding that is sorely lacking in the realm of modern manufacturing and robotic mass-production.

The process starts with artist Velasco Vitali creating the original of the dog sculpture in red wax, slicing and melting and applying strips according to some invisible plan. The only tools he uses are knives heated over a small burner. This completed wax sculpture is then passed onto the next station where it is surrounded by plastic tubing, again heated with a knife and sealed with wax in order to provide support to the finished item. All of this is then covered in a mass of clay (again, measured by eye and mixed by hand) until we are left with a massive menhir, smoothed and shaped by hand alone and lifted into position in the giant kilns using a combination of chains and rope.

As the giant menhir is lifted out of the oven, it is hoisted over to another part of the shop to be buried in sand with others where it receives, through a funnel created in the top, a mass of glowing yellow, molten bronze, which is then allowed to cool in the sand. While up to this point we’ve seen hands in close-up heating knives and applying wax and smoothing clay, here we see swinging pickaxes and shattering blocks of compressed earth. Eventually, the bronze figure emerges from the mass of earth as if from nowhere, and though it still looks merely like a convoluted mass of stained metal, this moment of emergence is unto the finished as rebirth is to the caterpillar. This motif of creation and rebirth is very important here – the process by which this item is removed from the cocoon is uncannily naturalistic, and there is a palpable feeling of relief and pride amongst the artists as the bronze is carefully carried over to the next station.

Finally, this half-finished though completely formed sculpture is taken inside to be polished and buffed and trimmed and welded and eventually patinated with a blow-torch. And finally, following all these processes the dog is finished – the vision of one man but the product of the work of many. Through all of this, the camera is patient, steady, willing merely to look. It is miraculous that there is no explanation needed. When the menhir is fired the first time it is just common sense that the wax within should melt and leave a perfect negative of the dog – we do not need to be told. A voiceover here or at any point in the film would distract the viewer from the process of observing and learning.

What makes this film really fantastic, and shows the unchanged history of the forge and the process, is that at every point in the creation of the dog we are shown grainy black and white 16mm footage of the same forge in 1967, in some cases with the same craftsmen, doing the exact same work then as now. It’s a wonderful method of telling by showing without telling, and by merely including the 16mm footage we are given access to not just 40 years of casting, but the many thousands before that too.

That this is Clerici’s first film shows an incredible maturity and patience, and an openness to past times and methods of creation that is astonishing. It is also really entertaining. More than once I found myself wondering, expectantly, just what would happen next and the excitement of seeing the finished product, having witnessed its creation and production through the many and varied hand gestures of its creators is wonderful.
This an immersive and oddly enthralling film, and one that shows just how well and thoroughly an act of creation can be mirrored in another visual-artist’s depiction of it.

Hand Gestures screens at the 59th BFI London Film Festival on the 9th and 10th October as part of the Love strand.