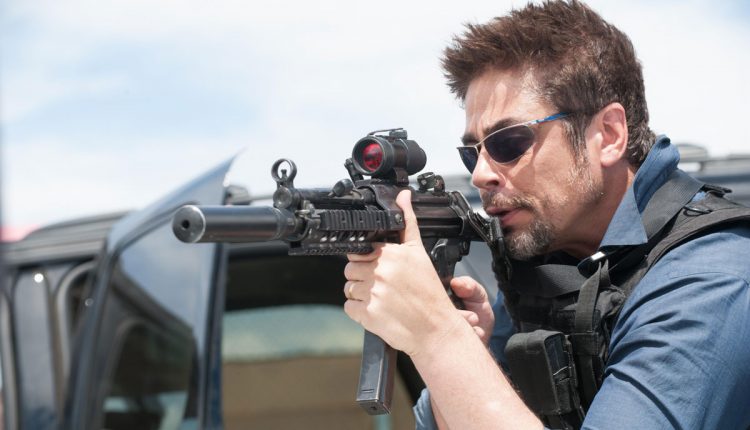 Even before the production credits fade, a drumbeat rises. Out in the desert, FBI agents close in on a small house. Light filtering through raised windows in their armoured van, Emily Blunt leads her team on a smash and grab raid straight through the side of the building. It’s an explosive start that launches Blunt into the murky world of anti-drug trade operations in Denis Villeneuve’s crime drama. Unshakably focussed, tense and bleak, it’s a compulsive journey into a fight falling apart at the seams.

Opening text informs us that the title Sicario, after a long trek from the Middle East, has come to mean hitman in Mexico. It’s the Mexican cartels the US Government is sizing up, and in turn Government agents find themselves walking into crosshairs. Initially, this is nothing to do with Blunt. She plays Kate Macer, leader of a tactical FBI hostage rescue team. Raiding a house belonging to alleged Cartel representative Manuel Diaz, they unexpectedly find 42 bodies. Acquitting herself well, she’s brought into a multi-agency taskforce led by Matt Graver (Josh Brolin) and Alejandro (Benicio Del Toro), two agents almost certainly straight out of the espionage game even if they deny it with a smirk.

Their aim is deceptively simple. They want to rattle Diaz enough to send him back home to his Cartel overlord. Then they swoop. Standard operating procedure is a redundant tool. The rules of the game have changed. They’re losing the fight; the only way to win is to abandon the checks and balances of law enforcement and hit back harder. At least that’s what they tell her. She doesn’t agree but she’s along for the ride.

Brolin and Del Toro are both charismatically effective, but this is Blunt’s film. She displays a potent mix of strength and confusion. The only woman in a man’s world, she succeeds because she’s damn good at what she does. Villeneuve and writer Taylor Sheridan handle gender well. It’s never an overt issue, never absent. She’s looked down on but so is her FBI partner Reggie (Daniel Kaluuya). It comes out most explicitly in scenes with Alejandro, a dark brooding man with a darker past. He latches onto her with misplaced paternalism. Even if he sees his daughter in Kate, he’ll still put her on the line if need be.

Politics creeps in around the edges. Sicario is no polemic against that war on drugs but its sympathies lie in Kate’s direction. Matt talks about the need to restore order while espousing a plan that deliberately creates chaos. For the greater good he’d argue. His idea of good might differ from others. When they storm across the border to locate Diaz’s brother, Kate is appalled at the use of deadly force in built up civilian areas. She doesn’t take any solace in the eruption of violence their entry leaves behind either. That’s just how they roll. There’s no place for her methods. A brief attempt to build a case based on confiscated bank accounts is dismissed as quickly as she can pitch it.

Villeneuve is careful not to lose intensity in these brief fragments of exposition. Like Kate, dialogue walks at the back of the team, ordered to stay out of trouble and mop up where needed. Built around three major set piece missions including the opening, actual violence is rare. With a powerful echoing score from Jóhann Jóhannsson, a composer on a roll at the moment, an excruciating fog of uncertainty coats each scene. Out in the daylight, every car they pass is a threat. Later, hidden down in a secret cross-border tunnel, the fight is claustrophobically terrifying. This pared down approach holds up, doggedly maintaining the air of fear in place from the beginning.

Villeneuve also makes the most of his burgeoning relationship with Roger Deakins, a cinematographer who rarely leaves an indistinct image. Working together for the second time after Prisoners, the dirty yellows and rusty browns of this canvas have the same chilly effect as their previous wintry collaboration.

Only occasionally do dulled genre devices crash the party. The never-ending fascination with pointed guns is overused. Blunt’s reaction when she finally understands what they’ve been doing and why she was needed is much more powerful before she reaches for a weapon. There’s also a twist with Jon Bernthal’s local police officer that gets close to questioning narrative credibility.

These are minor quibbles in the context of the wider film. Sicario sets strict boundaries early on and plays inside them with relentless determination. Villeneuve is getting very good at dark, character driven thrillers. Cannibalising just the right amount from genre cinema, he uses these hooks to explore broader issues. This is another fine addition to an increasingly fine career.