Tootsie is an effective comedy that seems very simple while walking a tightrope. The fact that it holds up today, and still feels relevant in many ways, is both a testament to how well put together it is and how difficult it has been to remove the insidious shadow of sexism from our society.

Dustin Hoffman stars as an actor named Michael Dorsey. Michael is a great actor, but he’s not getting any work. After a big argument with his agent (played by Sydney Pollack, who also directed the movie) he is told that he won’t get any work in the near future because he has a reputation for being too difficult. That leads to Michael changing his identity, and he creates the character of Dorothy Michaels, an actress who not only gets work, but ends up being quite the success. Of course, this doesn’t come easily. Michael has to hide his real gender from everyone else on the show that he’s working on, he develops some strong feelings for an actress working alongside him, and his flatmate (Bill Murray) just thinks that everything is getting a bit too weird. 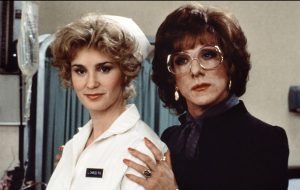 Written by Larry Gelbart and Murray Schisgal, with some other people helping to develop the story and tweak things here and there, Tootsie really benefits from a script that manages to pack in plenty of great lines with an assortment of wonderful characters and an ability to perfectly judge the tone for each scene.

Pollack directs well, and also does great in the role of Michael’s agent. The film may run for just under two hours, but it doesn’t feel overlong thanks to the different relationship types being looked at as Michael finds his perspective changed while viewing the world through the eyes of Dorothy. 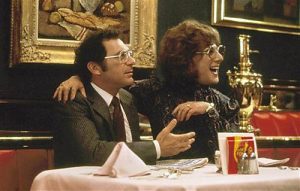 Hoffman is superb in the main role. He famously tested the character on a number of different people, only committing to the role when he knew he could convincingly play a woman without the character being someone to point and laugh at. Jessica Lange is equally good as the actress that Michael takes a liking to, which is difficult while Michael is being Dorothy. Charles Durning also does some fantastic work as Lange’s father, a sweet man who takes a liking to Dorothy, which is difficult for Dorothy, actually being Michael, of course. Dabney Coleman is the director of the TV show that makes Dorothy a star, George Gaynes is the older actor in the show who always tries to kiss all of his co-stars and there’s a very small role for Geena Davis, making her feature debut. Elsewhere, Teri Garr is very funny as a long-time friend who ends up very confused by Michael’s behaviour and Bill Murray is as good as ever, playing the one man who knows all about Michael’s double life. 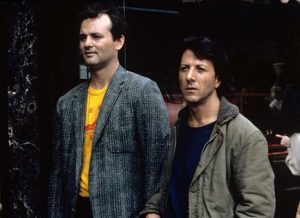 Tootsie succeeds by not going for any easy laughs. It’s a character piece that uses a slightly far-fetched premise (though probably not THAT far-fetched) to look at sexism, love, loneliness, and even how difficult life can be as an actor trying to make ends meet. It’s smart, often very funny, and full of little moments that capture the human condition, and it goes to prove the old saying: “many a true word is spoken in jest.” 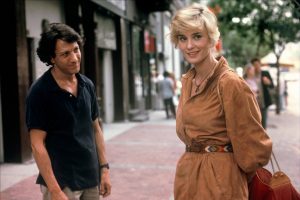