WarGames holds up today as an enjoyable drama, which is surprising considering just how dated it is. This is a movie about the danger of computers made at a time when computers were still very unwieldy and slow, but it holds up thanks to a decent script, perfect pacing and some fine performances from the cast.

Matthew Broderick plays David, a bit of a computer whizz who gets all excited when he hears about a software company having developed a new game that he’s keen to try out. Instead of waiting for it to hit the shelves, like normal people have to do, he ends up hacking his way into what he thinks is their central online area. It’s not. Unfortunately, and unwittingly, David starts to play a game of Global Thermonuclear War with a computer that isn’t pretending. As things develop, and he realises just what’s going on, David tries to stop the game. But it’s not that easy.

Directed by John Badham, WarGames should be a bit of a relic by now, a quaint slice of fun from a time long before everyone had the internet available on their mobile phone. The fact that it remains a decent, diverting bit of entertainment is thanks to the script, by Lawrence Lasker and Walter F. Parkes, getting a good balance between the tech side of things and the dramatic aspects, Badham’s light touch with the direction, and the cast all doing solid work. 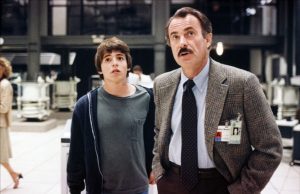 Broderick is particularly good in the lead role, playing a very smart young man who doesn’t mind breaking some rules but does his best to fix a mistake that causes such an awful situation. Ally Sheedy is the girl interested in what he gets up to, and she ends up going along for the ride, just as desperate to resolve the whole thing as Broderick. John Wood isn’t onscreen for all that long, but he’s a very important character, the man who invented the programming that looks set to destroy much of the world, and he does just fine in his role. Other adults trying to keep a handle on the whole thing include Dabney Coleman and Barry Corbin, while John Spencer and Michael Madsen have a few minutes onscreen in a sequence that explains just why the computerised system has been set up and considered as an option for such major tactical decisions.

It may not ever feel as dark or dangerous as it could be, but that works in its favour. Believe me, I like a bit of darkness, an edge, in my movies when they need it. This film doesn’t need it. It sets the tone perfectly during the first 10-15 minutes and then keeps everything nicely balanced as it builds up to a cerebral, tense finale. The hardware involved may have changed greatly over the past few decades, but the essence of good movie-making has stayed the same. And this is good movie-making.