Yes, when it was announced before filming began on the 2006 Bond movie, Casino Royale, that Daniel Craig was going to be the new James Bond there were the usual amount of discussions and arguments among film fans. The man who had impressed TV viewers in “Our Friends In The North” was a fine actor, with roles in the likes of The Road To Perdition, Elizabeth and Enduring Love to name but a few, but he did not seem like James Bond material. And then he did Layer Cake, in which he exuded effortless, unflappable cool. By the time Casino Royale finally hit the big screen, the latest actor to portray James Bond took mere moments to show everyone that he was, indeed, made of the right stuff. 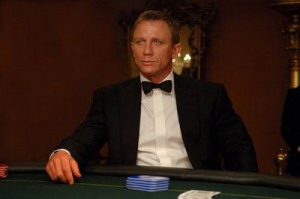 Bond retooled and revamped once again, how will he fare in this post-Bourne world with his outdated style and misogyny? How will Daniel Craig handle stepping into the iconic role? How will this compete with the other franchises of the time? The answer to all of these question – bloody brilliantly.
The tale, like most Bond movies, is deceptively complex-sounding while remaining quite simple. Basically, Bond gets himself into a high-stakes poker game against a major baddie who MUST win (thanks to the fact that he, stupidly enough, took some terrorist’s money and lost it in a bad investment).

And the result of this forced gambling is absolutely fantastic.
The first 20 minutes are just breathtakingly entertaining and, of course, the film can’t keep that pace up for the next 2 hours. However, for the most part, it almost makes it. Some great humour, some nice nods to the future character that Bond will become, some brilliant stunts and vicious fight sequences complete another great instalment in a franchise that somehow keeps managing to adapt with the times while retaining the very British Bond-ness we have come to know and love. Martin Campbell’s direction is a big part of the success, as is the screenplay by Neal Purvis, Paul Haggis and Robert Wade, as is the creative stuntmen and women involved. As is the cast, of course.

Daniel Craig slips into the tux like he was born to do so, giving Bond a youthful arrogance, impetuousness and sense of bravado, yet also keeping the charm, sly humour and intelligence. Eva Green is a nice enough Bond girl, not anything special but decent eye-candy and holds her own well against the main man. Judi Dench is wonderful as M, a role that now brings with it an undertone of exasperated maternal worry. Jeffrey Wright is sadly only adequate as Felix Leiter, the recurring character who has now appeared in roughly 9 movies from the series. Then there is Mads Mikkelsen as Le Chiffre (the main, gambling baddie who can cry tears of blood thanks to some . . . gubbins). Mikkelsen is good with what he is given but, regretfully for him, that’s not really a lot.

My only two complaints were that Bond seemed far too easily fooled on a couple of occasions (but, of course, that was the point . . . he had to learn) and that the ending seemed to appear and then fade and then appear again. By the last 15 minutes I was thinking of Return Of The King and wondering if Campbell had wagered with Peter Jackson that he could cram more endings in. Mind you, given the fact that Campbell has now refreshed this franchise TWICE (and with absolute success on both occasions) I cannot really dwell on the minor failings for too long. Well . . . there was the weak baddie too. Okay, that’s three complaints but that is it. Honest. Three minor niggles for an action-packed movie that runs at just over two hours in length? I’d say that’s pretty good going. 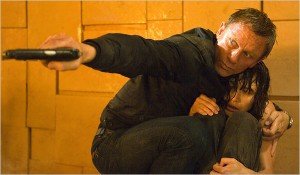 I was in exactly the same position as everyone else when I first saw Quantum Of Solace, the second Bond movie starring Daniel Craig in the title role. I left the cinema thinking of what a massive disappointment it was, especially coming after the superb Casino Royale. Revisiting the movie, however, has led to me viewing it in a more favourable light.

Following on from the events of Casino Royale, James Bond is out for revenge but revenge isn’t healthy for a secret agent. As pressure mounts, our main man finds himself actually getting his head back in the game and being able to focus on the tasks in hand while reeling in his hidden emotions. This is essential as he tries to find out more about an organisation that seems to have people everywhere and be able to manipulate anything they want.

The script is once again written by Neal Purvis, Robert Wade and Paul Haggis and the continuity and flow of the overall story arch really helps move things along through one of the shorter Bond movies (just passing the one hour and forty five minute mark, making it actually the shortest of the official Bond movies to date). It’s a down ‘n’ dirty, gritty movie but the action set-pieces are still scattered throughout and still impress. An initial car chase sequence may suffer from poor editing but it’s soon followed by a great footchase sequence that culminates in a wonderfully inventive, literally suspenseful, fight scene. There’s a decent speedboat chase but that’s overshadowed later on by some fantastic aerial stuntwork and the finale is as explosive as you’d expect from a Bond movie.

Craig is still fantastic, Judi Dench still wonderful and Jeffrey Wright gets a bit more to do this time around in the role of Felix Leiter. Olga Kurylenko is an attractive and feisty Bond girl while Gemma Arterton pops up to double the sex appeal. And then we have Mathieu Amalric as an unimposing, yet believable, baddie. Because this is no movie in which Bond chases someone set on world domination, this is a movie in which Bond tries to take down people who are already controlling large portions of the world.

Marc Forster directs and shows his lack of experience in the big action moments but then makes up for this with his work on the other aspects of the film. Bond goes through a range of emotions here, the politics of the movie are both complex and yet accessible and all of the information and characterisation required is delivered with maximum efficiency.

If, like me and a lot of other people, you came away from your first viewing of Quantum Of Solace complaining about how hugely disappointed you were then I urge you to give it another watch. You might just find yourself as pleasantly surprised as I did.

So just what does the future hold for 007? Beyond Skyfall, who knows? All we do know is that no matter the ups and downs of the franchise, Bond belongs to us Brits and we give him to the world as a gift for everyone to share and admire. Well, that’s how we like to see it anyway.

Whatever happens with the films, be it actors coming and going, cinematic trends changing or just a tightening of movie studio purse strings, we can almost always be sure of one thing.