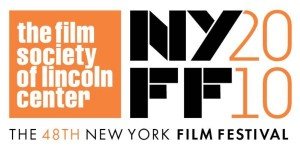 THE SCREENINGS. As usual the Press & Industry screenings are a pleasure, beautifully presented in comfortable surroundings and if not the most cutting edge series, at least the classiest and nicest to watch of my movie year. They’re presented separately from the public ones, at the Walter Reade Theater, a venue that’s cozier than the large, handsomely renovated public screening auditorium, Alice Tully Hall, yet has superb image and sound facilities, and a stage where Q&A’s are conducted. Refreshments and coffee are provided in the spacious gallery across the lobby. There is a first-rate staff headed by theater manager Glenn Raucher, who in two and a half years in the job has emerged as more and more indispensable — as well as a pleasure to have around. Screenings are scheduled over a longer period than the festival itself, on weekdays only, spread out so that anyone with the time in mornings and afternoons to spare can watch everything in a civilized manner.

THE FILMS. Favorites that I’d call mainstream or conventional are the brilliant, fast-paced The Social Network (David Fincher); subtle, complex Poetry (Lee Chang-dong); the thrilling biographical miniseries Carlos (Olivier Assayas); the French drama of the clash of politics and religion, Of Gods and Men (Xavier Beauvois); and an original first film, a German character study about a crook who’s also a star athlete, The Robber (Benjamin Heisenberg) — which I’d rate in about that order. These are my top picks. But not all I recommend. And highlighting them doesn’t mean the festival doesn’t have depth, even if there was nothing in 2010 as great as Haneke’s The White Ribbon or as provocative on a grand scale as von Trier’s Antichrist or on a lesser scale Precious and Trash Humpers, all included in last year’s NYFF.

Movies I liked a lot that are a edgier and demanding are the dark political portrait of Seventies Chile, Post Mortem (Pablo Larraín), and the cannibal genre film We Are What We Are (Jorge Michel Grau).

Manoel de Oliveira’s Strange Case of Angelica is in a class by itself. From what I’ve seen of de Oliveira’s work, it’s feather-light, but lovely. Likewise I’d put Clint Eastwood in a class by himself. He is an old-fashioned filmmaker. Hereafter deserves respect. It’s not quite successful, but it has class, it’s thought-provoking, and it has fine acting and terrific action scenes, unusual because they have both punch and restraint.

I’m not so happy with Kiarostami’s Certified Copy, which was so well received at Cannes. It’s beautifully made, but it seems a put-on, posing as something profound (and melding into polished European filmmaking, after a lifetime of working in Iran), but its game-playing by a couple who may be long married or have just met seems gimmicky. I’d not have included it. Thought art house film-goers will love this film, it left me feeling empty and a little played-with.

Another Year (Mike Leigh) is beautifully made and acted but seemed too pat and schematic. Leigh gets great performances and has a powerful working method, but his recent films seem fun yet don’t leave such a strong impression. Julie Taymor’s The Tempest, chosen partly to sell tickets as the Centeriece film, has some nice acting, but isn’t at all an interesting interpretation of Shakespeare. Just window dressing.

Offerings from Eastern Europe and Russia or Ukraine continued familiar veins for where they came from and were quite disappointing. Cristi Puiu’s slow motiveless study of multiple murders Aurora (not up to his Death of Mr. Lazarescu) and Radu Muntean’s family breakdown movie Tuesday, Before Christmas, both from Romania, are very similar, slow, flat, obsessively quotidian. They have a certain quality but don’t seem very memorable, perhaps due to a lack of narrative structure. Aleksei Fedorchenko’s Russian folkloric tale Silent Souls wasn’t very memorable either. Sergei Loznitsa’s debut My Joy may seem radical to some but impresses only for its ultraviolence–and, admittedly, some fine camerawork. It makes ultimately no narrative sense and is a series of anecdotes posing as a coherent story. Nothing outstanding. The Romanians seem overrated, the Russians not living up to past performance.

Other disappointing features were Kelly Reichardt’s attempt at a radical western, Meek’s Cutooff, a lame misfire; and Korean auteur Hong Sang-soo’s Oki’s Movie. Hong, whose almost Nouvelle Vague-like studies of male-female relationships and vain movie directors I’ve loved in the past, seems to be repeating himself and running in circles. The followup of The Maid by Chiliean Sebastian Silva and his partner Pedro Peirano, Old Cats, seemed to ruin a good setup and actors with writing of the daughter’s part that fell into caricature. The brilliant French-Arab director Abdellatif Kechiche’s Black Venus was much too long; he seemed to want to punish the audience with his message of 19th-century white racism and this was a falling off from earlier work closer to his own experience.

Two greats produced works I couldn’t quite tune in to. Godard’s Film Socialisme’s provocations seem largely incomprehensible; images are intermittently ugly — beautiful. Raúl Ruiz’s Mysteries of Lisbon is gorgeous, its mise-en-scene rich, its tales fascinating. But the tales-within-tales failed to dovetail; the long film is impossible to follow. Mysteries of Lisbon is a very fine film — almost. A masterpiece manqué.

Festivals naturally and properly favor films that set themselves apart from mainstream fare. This means a leaning toward work that is hard to understand, glacially slow, often shot cooly, like Hou Hsiao-hsien’s and some other great Asian directors’, from a certain distance with a stationary camera. There’s also a taste for features that merge fiction with documentary elements, especially exotic ones. Uncle Boonmee Who Can Recall His Past Lives, the Thai festival darling Apichatpong Weerasethakul’s Cannes 2010 top prize winner, fills the bill. He has every right to go his own way. However when all is said and done he works so far out on the margins that he connects emotionally only occasionally. This study of rural spiritualism and communication with the dead has haunting and beautiful moments, but also seems disjointed, fey, and self-indulgent.

Documentaries of the festival kind similarly are ones that test an audience, are hard to follow (not a crime), without commentary or with mysterious commentary. Le Quattro Volte and Robinson in Ruins were of that kind, and The Autobiography of Nicolae Cea?escu, a valid portrait of the Romanian dictator but one that could probably have been an hour shorter. Fred Wiseman’s repetitive and boring Boxing Gym did not enchant me. He has covered everything but when he takes the fun out of even ballet I balk. These sometimes haphazard documentary efforts do no honor to the work of great directors included in the festival, whose jurors might rethink their documentary selecting process. On the other hand the conventional documentaries LennonNYC and Letter to Elia (a sidebar) and the handsomely mounted financial meltdown study Inside Job were very worthwhile — especially the latter, the important (if not unique) Inside Job, which was as smart as The Social Network. Lennon, Elia, and Inside Job are of interest, but does their aesthetic merit warrant inclusion? Docs remain a moot point for the NYFF. Maybe they should include only one really fine one and let it go at that. A doc on a level with Spike Lee’s When the Levees Broke, or Philibert’s To Be and to Have, and other great ones. But when you consider content apart from form, you go astray.

Unfortunately I could only see part of the Mexican short collection, but it shows Mexican filmmakers have coherence and more of a sense of commonality than directors of any other Latin American country. Latin America in general remains a source of vibrant new work, while Korea has fallen back somewhat, and Japan and Italy remain in decline from past glories.