Thamesmead Estate was the location for Alex's slow-motion beat-down of his fellow droogs.

16
SHARES
1.6k
VIEWS
Share on FacebookShare on Twitter
A lot of interesting, political and experimental things happened in the cinema of the seventies, but it was not a great decade for science fiction movies. Granted, there was a handful of trashy, low-budget sci-fi/horror movies (in that era, Italy could always be depended on to provide those), but apart from rarely being good, they were leaning rather more towards horror than sci-fi. Hollywood’s sci-fi efforts were there, but they never really took off. An effort like Silent Running (1972) had an admirable eco-message, but projected the same despondency that it was feebly trying to cry out against. Slaughterhouse-Five, Westworld and Soylent Green (all 1973) were good and well-produced movies that largely did what they set out to do, but remained outside of brilliant territory. Zardoz (1974) was a worthy outing with an interesting political subtext, but its unevenness and general cheesiness makes it hard to take seriously today. Rollerball (1975) was awfully dull. The Stepford Wives (1975) was very good and almost got a place on the list below. Logan’s Run (1976) was a nice production in some ways, but it was also a critique of how terrible it would be if the world was ruled by adult-hating young people, and as such it stands as a conservative tract which was already proven wrong by the time it hit movie theaters.

It all changes in 1977 with the release of not just one, but two huge sci-fi hits: Star Wars by George Lucas and Close Encounters of the Third Kind by Steven Spielberg.  As a result, towards the end of the ‘70s Hollywood went overboard rushing out bad Star Wars rip-offs, but almost none of those succeeded in challenging the bounds of mediocrity. Fortunately, though, it is possible to compile a top ten of truly worthy science fiction efforts from 1970-1979 (even if a few of them have major elements of horror – something that can be forgiven due to their high overall quality). Exactly half of the following ten are based on a previous literary work. 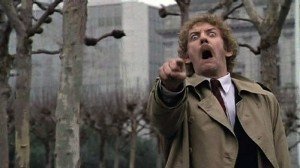 The 1956 original of this title was a great movie in its own right, tapping right into the Western zeitgeist of its day, but the 1978 remake was better still, and demonstrated how far production values and the devices of cinematic storytelling had come in the two decades since the original. The truly scary remake made an indelible impression on all who watched it – especially young people; who can forget the dog with the human head? The stellar acting by such ‘70s luminaries as Brooke Adams, Donald Sutherland and Jeff Goldblum – and let’s not forget Leonard Nimoy – was convincingly real, and a classic was born.

Malcolm McDowell was not resting on his laurels after becoming a household name following his acclaimed collaborations with Stanley Kubrick and Lindsay Anderson. Here we find him as a mild-mannered H.G. Wells, who has to pursue Jack the Ripper to 1979 in the time machine he invented. The movie almost spends more time showing Wells’ reaction – sometimes conservative, sometimes open-minded – to the modern world than on the actual plot, and that’s one of the reasons I, for one, find so much to enjoy in it. Wells meets Amy (a very adorable Mary Steenburgen), who helps him adapt to the free-wheelin’ seventies. The movie is a lovely production in every way. 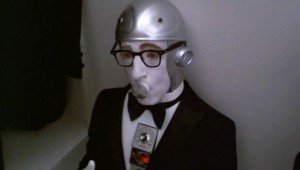 That Woody Allen, eh? I can’t say I’m a fan of his later movies, most of which are somehow all the same movie, but in the late ‘60s and early ‘70s he did a string of marvellous political comedies. In Sleeper, Miles Monroe (Allen) goes to the hospital for a simple operation and somehow wakes up 200 years later. The world has turned into a strange and comical 1984-like place of technological complacency, which Miles shakes up by his very presence. It’s enormous fun, and it spawned an unofficial remake two decades later in the equally entertaining Demolition Man (1993), in which an effective part of the joke is that Allen’s character is played by bulky action hero Sylvester Stallone. 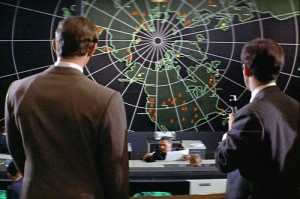 Colossus is not often mentioned, but it nonetheless stands as a towering achievement in ‘70s science fiction cinema. A super-computer is created to run military operations, but (unsurprisingly, as this is a subject that literary science fiction had already dealt with for decades when this movie came out) the computer becomes tyranically intelligent and seizes control of America’s nuclear arsenal. It then holds the world ransom, pressuring the authorities into doing its bidding lest it destroys civilization. Its creator, Dr. Charles Forbin, then faces the challenge of having to outthink the super-computer. The movie (still) feels realistic and convincing in most areas, and it is this which makes it so impressive. 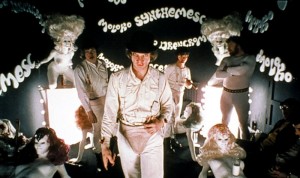 Kubrick and McDowell wrote themselves into cinema history with “a bit o’ the ol’ ultra-violence”, depicting a future just as troubled as a 1971 in the throes of the hippie counter-culture, but taking some rather more radical steps to deal with it. As in many movies, violence is used to symbolize radical social change. The juvenile delinquent and violent gang leader Alex is subjected to a massive reconditioning program, designed to brainwash, I mean reform, him into a productive and well-adapted member of conventional society. Discussion of the ethics involved is part of the narrative, and the authorities finally opt to abandon the program as too inhumane. Alex neither could nor should be reformed – the message being that ‘70s counter-culture should not be repressed by conservative authorities, either. 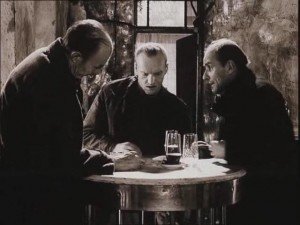 A Russian short story by the best known Soviet sci-fi authors, the Strugatsky brothers, provides the basis for this cinematic masterpiece. Aliens have visited Earth and left behind some mysterious zones full of danger and distorted laws of nature. An illicit guide to such a zone – a “stalker” – leads two intellectuals into the strange landscape in an attempt to reveal the secrets it holds. The Soviet Union itself did and still does seem to be such a zone, so not a terrible lot of special effects were called for – it was sufficient to film the unkept and debris-filled rural environment. Tarkovsky stretches his means so far that, for the past thirty years, film students all over the world have been inspired by the many original directorial techniques displayed here. Click on the title to read my full review. 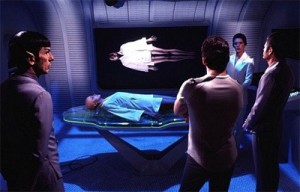 Following the success of Star Wars in 1977, Paramount’s failed efforts to produce a new “Star Trek” TV show were given new energy, and it was decided to do a big-budget motion picture instead. Trek fans are still arguing about whether the first movie (in a franchise that were to spawn another dozen) is great or not – a lot of Trekkers are not enamored of it. More general sci-fi fans, however, love it. Earth is threatened by an entire approaching solar system of conscious technology which was the result of Earth’s Voyager space probe encountering a distant machine intelligence. The movie has all the wonder and the big ideas of science fiction at its best, including huge vistas of alien architecture and a lovely sequence of the new starship Enterprise in spacedock. The movie may owe more to 2001 – A Space Odyssey than to Star Wars. In any case, it is delightfully original and self-contained. In my view one of the best Star Trek movies – even if some of the acting and the costuming may no longer hold up very well. 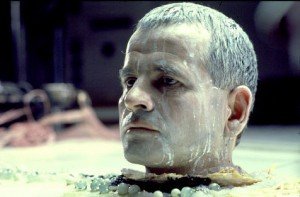 Here, kitty kitty! While I am not particularly a horror fan, and have little patience for movies filled with corridors so dark that the plot itself has a hard time finding lamp-light, I still love Alien because the setting and the situations feel so real; there is so much lovely dirt, wiring, left-over paper, scraps of food – that spaceship looks lived in! And the characters and their reactions appear incredibly genuine. The power of their anxiety is palpable as they are stalked and picked off one by one in the most claustrophobic environment you can imagine. The movie is about the fear of the unknown, and the unknown is a super-predator from space. But it has a political dimension that compensates for its negative portrayal of space and technology: everything is ultimately the Company’s fault. Greed and power-lust are the true monsters that threaten to destroy us all. 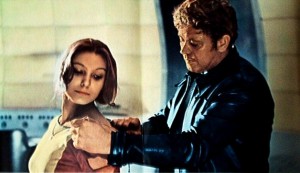 What happens when a scientific expedition discovers a planet with an intelligent ocean? A completely alien entity, with which we have nothing but intelligence in common, and whose power to try to understand us is far greater than our power to try to understand it? The very concept is as breathtaking as it is daunting, and so are the consequences as Tarkovsky relays them. Based, of course, on Stanislaw Lem’s most famous novel. 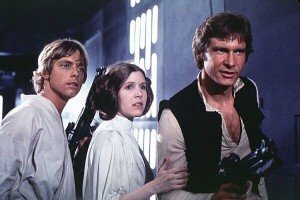 George Lucas’ brand-new take on Flash Gordon, inspired by everything from comic books (Dr. Doom = Darth Vader. New Genesis from The New Gods = the Death Star) to the classic planetary romance of Edgar Rice Burroughs and the mythology analyses of Joseph Campbell, made a splash heard ‘round the world as it was released to incredible success and a plethora of merchandising. Heroes and princesses in a space opera setting was apparently just what the world was waiting for in 1977, and the Star Wars craze has hardly let up since. A lasting fan and collector base has long since consolidated itself, and the imagery of the Star Wars movies has become a collection of cultural icons. It’s a great movie – probably the best science fiction movie of all time – and although the sequels did not live up to the original vision, this classic deserves its success and status at the very core of the cinematic sci-fi canon. Click on the title to see my recent review.
Tags: actionadventuredramamysterysci-fisci-fi monthstar warsTop Ten