On Wednesday 23rd May, for one day only, Iron Sky will be shown at cinemas across the country, and then released on DVD on Monday 28th May.

The number of cinemas screening Iron Sky this week is limited, but if fans want to see the film near home, get in touch with your local cinema to let them know there’s a demand! Interest can also be expressed and viewed on this interactive map within the Iron Sky website: http://www.ironsky.net/site/support/how-to-support/ 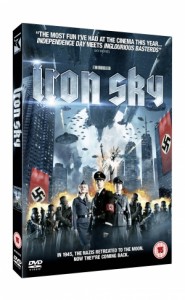 To celebrate the cinematic and DVD release of the highly original and entertaining sci-fi we are running a competition to give away 3 copies of the DVD. To enter this competition you need to do the following…

RT @flickfeast: Iron Sky in cinemas this Weds and on DVD 28th May – Retweet and win http://bit.ly/JiokHg