Win a Blu-ray of The Wind Rises 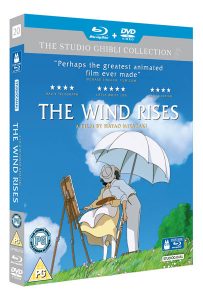 Jiro dreams of flying and designing beautiful airplanes, inspired by the famous Italian aeronautical designer Caproni. Nearsighted from a young age and thus unable to become a pilot, he joins the aircraft division of a major Japanese engineering company in 1927. His genius is soon recognised, and he grows to become one of the world’s most accomplished airplane designers.

The Wind Rises chronicles much of Jiro’s life, and depicts key historical events that affected deeply the course of his life, including The Great Kanto earthquake of 1923, The Great depression, the tuberculosis epidemic, and Japan’s plunge into war. He meets and falls in love with Nahoko, grows and cherishes his friendship with his colleague Honjo, and innovates tremendously, leading the world of aviation into the future.

Hayao Miyazaki brings together the engineer Jiro Horikoshi and the author Tatsuo Hori, who lived during the time of the story of The Wind Rises to create Jiro, a fictional character at the centre of an epic tale of love, perseverance, and the challenges of living and making choices in a turbulent world.

The Wind Rises was released on DVD and blu-ray double play this week and we’ve 3 copies of the blu-ray to give away to you lucky readers.

Competition Rules:
* flickfeast is the promoter of the competition
* Competition is open to UK residents only
* The winner will be picked at random from entrants who have correctly answered the question.
* The Editor’s decision is final and binding on the entrants. No correspondence will be entered into.
* Closing date is 31st October. The winner will be notified by email and must respond within a week otherwise they forfeit the prize.
* flickfeast reserve the right to award a different prize of equal value
* You must be registered on the site to enter so if you’re not already please register (it’s free)