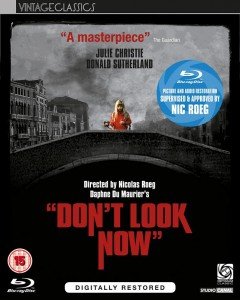 From the director of Walkabout, The Man Who Fell to Earth & Bad Timing, Don’t Look Now is  Digitally restored** and out on blu-ray today.

Don’t Look Now  stars Donald Sutherland and Julie Christie in Nic Roeg’s brilliantly atmospheric adaptation of the novel by Daphne du Maurier. Following the death of their daughter, John and Laura Baxter travel to Venice where he is to oversee the restoration of an old church. Here they encounter a pair of elderly sisters: one of them a blind psychic who claims to have been in communication with the couple’s dead child. Whilst Laura is intrigued John resists the idea, despite the possibility that he is having his own visions that threaten to put his life in danger…. Genuinely unsettling, Don’t Look Now is widely acknowledged as perhaps Roeg’s finest film and one of the best British films of all time.

Courtesy of Optimum Releasing we have threee copies to giveaway. To be in witha chance of winning simply answer the following question…

Competition Rules:  You must be 15 or over to enter. The competition closes on 16th July 2011 and you must be registered on the site to enter so if you’re not already please register (it’s free)! Winners will be notified via email once the draw has been taken and the winners must claim their prize within a week otherwise a replacement winner will be drawn.