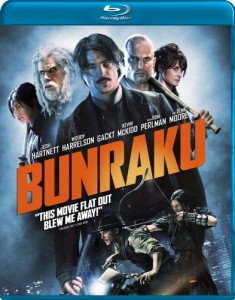 With a Budget of $25 million and loaded with an all star cast including Josh Hartnett (Black Hawk Down, 30 Days of Night), Woody Harrelson (Natural Born Killers, Zombieland), Demi Moore (A Few Good Men, GI Jane) and Ron Perlman (Hellboy, City of the Lost Children), Bunraku is an all action fantasy western that blends Sin City with Kung Fu Hustle.

A mysterious drifter (Hartnett) and an ardent young Japanese warrior Yoshi, played by Gackt in his international film debut, both arrive in a town that is terrorized by outrageous and virulent criminals. Each is obsessed with his separate mission, and guided by the wisdom of The Bartender (Harrelson) at the Horseless Horseman Saloon, the two eventually join forces to bring down the corrupt and contemptuous reign of Nicola (Perlman), the awesomely evil “woodcutter” and his lady Alexandra (Moore), a femme fatale with a secret past.

The film mixes skewed reality with shadow-play fantasy, in a place where even the landscape can betray you. Heroes triumph here only because the force of their will transforms and transcends both space and time. The world of Bunraku is past and present, fantasy and reality, Samurai and Western all combined.

Resonating through a wide range of cultures and showcasing a mind-blowing array of martial arts disciplines, Bunraku is a fresh arena for breath-taking fight action. Bunraku is released on DVD & Blu-ray 10th October.

Competition Rules:
* The winners will be picked at random and contacted by Flickfeast.
* The Editor’s decision is final and binding on the entrants. No correspondence will be entered into.
* Closing date is 30th October 2011. The winners will be notified by email and must confirm and claim the prize within a week otherwise the prize will be redrawn.
* You must be registered on the site to enter so if you’re not already please register (it’s free)