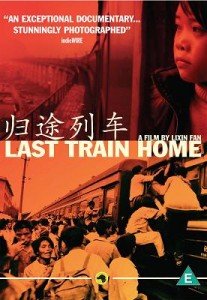 Every Spring China’s cities are plunged into chaos, as all at once, a tidal wave of humanity attempts to return home by train. It’s the Chinese New Year and millions of migrant factory workers are desperate to return to their rural villages and to the families they left behind to seek work in the booming coastal cities.

It is an epic spectacle that gives a huge insight into China, a country discarding traditional ways as it hurtles towards modernity and global economic dominance.

Chinese-Canadian director Lixin Fan paints a picture of the fractured lives of a migrant family caught up in the annual migration with his engaging and visually beautiful debut film Last Train Home which comes to DVD on 25th October 2010 courtesy of Dogwoof.

The Zhangs abandoned their young children to find work in the city in order to earn better money and create a better life for their children, but sixteen years later it seems that their hopes for a better future have been undone by their very absence. Their daughter Qin who was left behind, has grown into adolescence crippled by a sense of abandonment and drops out of school as an act of rebellion and ending up joining her parents in urban factory work

The decision is a heart-breaking blow for the parents and in classic cinema verité style, Last Train Home follows the Zhangs’ attempts to change their daughter’s course and repair their ruptured family.

Intimate and candid, the film paints a human portrait of the dramatic changes sweeping China.

Last Train Home is released on DVD 25th October 2010 and, courtesy of Dogwoof, we have 2 DVDs to giveaway. To enter the competition just answer the following question…

Competition Rules: You must be 15 or over to enter. The competition closes on 30th October 2010 and you must be registered on the site to enter so if you’re not already please register (it’s free)!