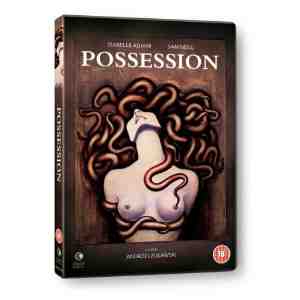 Part horror, part political allegory Possession, directed by avant-garde Polish helmer
Andrzej Zulawski, is a hugely controversial film. It appeared on the notorious banned
‘Video Nasties’ list and has been unavailable in the UK on DVD until now.

With their marriage in tatters Anna (Adjani) and Mark’s (Neill) tense relationship has
become a psychotic descent into screaming matches, violence and self-mutilation.
Believing his wife’s only lover is the sinister Heinrich, Mark is unaware of the diabolical,
tentacled creature that Anna has embarked on an affair with. The unhinged woman visits
her monstrous lover in a deserted Berlin apartment and will stop at nothing to protect
him.

Seen by some as a horror and released as such in the US and others as political
metaphor this explosive film split audiences on its initial release and still has the power to
shock today almost 30 years later.

His films banned in his homeland during the Communist era, !u”awski self-exiled to
France, and, eschewing mainstream commercialism, his contentious works have earned
him numerous awards and accolades. Possession was nominated for a BAFTA and the
Palme d’Or and Adjani’s astonishing performance earned her Best Actress awards at the
Cannes Film Festival and the French Césars.

With its dark subject matter and high gore quotient, Possession is not for the faint
hearted.

Special features: The Other Side of The Wall – The Making of Possession, Interview
with Andrzej Zulawski.

Possession is released on DVD 25th October 2010 and, courtesy of Second Sight, we have 2 DVDs to giveaway.  To enter the competition just answer the following question…

Competition Rules: You must be 18 or over to enter. The competition closes on 28th October 2010 and you must be registered on the site to enter so if you’re not already please register (it’s free)!

Disney’s Planes is flying high at #1