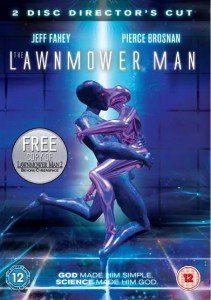 It predicted a world where computers rule and man retreats into a cyberworld of virtual reality that ends up taking over your life…The Lawnmower Man, initially released almost 20 years ago, is a smartly prescient film that pre-dated the Internet and is now set to return in a new director’s cut.

The Lawnmower Man Director’s Cut will be released as a stunning two-disc set, complete with a stunning array of bonus features including Lawnmower Man 2: Beyond Cyberspace on 25 October 2010 courtesy of Universal’s cutting edge indi VISION imprint. Starring a pre-Bond Pierce Brosnan as a scientist experimenting in virtual reality worlds, looking at “intelligence enhancement”, and Jeff Fahey (Lost, Planet Terror) as a slow-witted gardener who becomes his test subject, The Lawnmower Man boasts groundbreaking special effects and a neat line in predicting the march towards the computer-dominated future.

Dr Lawrence Angelo (Brosnan – Mamma Mia!, GoldenEye) is a scientist working for a secret government agency called Cybertech who experiment with boosting intelligence. Mixing drugs and virtual reality Angelo has a breakthrough with his chimp subjects increasing their IQ but with unpleasant side effects. He decides it is time to experiment on a human guinea pig and enlists the ideal candidate, his gardener Jobe Smith (Fahey) who suffers with learning disabilities. The treatment not only improves Jobe’s intelligence and sex drive but he also develops ESP. As his powers grow and he spends more and more time in the virtual world, Jobe becomes more aggressive, vindictive and angrier until he vows to have his revenge on all of the townspeople who patronised and bullied him.

The Lawnmower Man Director’s Cut is released on DVD 25th October 2010 and, courtesy of Universal Pictures, we have 2 DVDs to giveaway.  To enter the competition just answer the following question…

Competition Rules: You must be 15 or over to enter. The competition closes on 25th October 2010 and you must be registered on the site to enter so if you’re not already please register (it’s free)!