Win England is Mine DVDs

Entertainment One (eOne) is pleased to announce that England is Mine – the enthralling story of the making of one of British music’s most influential figures – Morrissey – is available to download now from iTunes and on DVD from Amazon). To celebrate, we’re giving away two DVD copies. 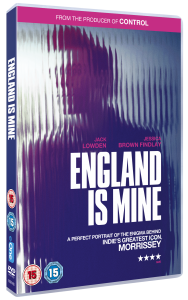 In 1970s Manchester, Morrissey dreams of becoming a musician but struggles to find his voice. After much soul-searching, his efforts culminate in him meeting Johnny Marr: a meeting that would lead to the formation of legendary ’80s band The Smiths, and change the face of British music forever.

Starring Jack Lowden (Dunkirk) and Jessica Brown Findlay (Downton Abbey), England is Mine is brought to the screen from the Oscar® and BAFTA nominated director Mark Gill and from the producer of Control – Orian Williams.

To be in with the chance of winning, just answer this question:

When was Morrissey born?

Let us know the answer either via Twitter, Facebook or in the comments below. Winners will be announced on Saturday 23rd December. Good luck!

Our verdict on the Mozzer biopic is available here.