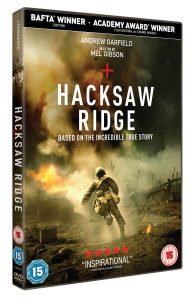 Having received a 10-minute standing ovation when it first premiered at the Venice Film Festival, Lionsgate is pleased to announce that HACKSAW RIDGE – the extraordinary true story of conscientious objector Desmond Doss – will be available to own from 22nd May 2017. To celebrate the release, we’re giving away 2xDVD copies!

From Academy Award winning director Mel Gibson – HACKSAW RIDGE was nominated for six Oscars® at the 89th Academy Awards® including Best Picture; the film took home the award for Best Film Editing and Best Sound Mixing. It was also nominated for five BAFTAs at the 2017 Awards, including Leading Actor; the film was awarded a BAFTA for Best Editing.

Competition Rules:
* flickfeast is the promoter of the competition
* The winners will be picked at random from entrants who have correctly answered the question.
* The Editor’s decision is final and binding on the entrants. No correspondence will be entered into.
* Closing date is 26th May 2017. The winners will be notified by email and must respond within a week otherwise they forfeit the prize.
* flickfeast reserve the right to award a different prize of equal value