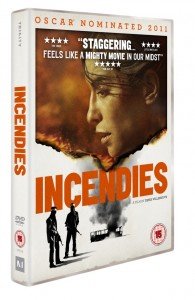 Masterfully adapted from the acclaimed play by Wajdi Mouawad, Incendies brings to life a moving and epic tale through the unravelling of one woman’s mysterious past. At the reading of their mother Nawal’s (Lubna Azabal) will, twin siblings Simon and Jeanne learn for the first time that they have a brother and that their father, whom they thought was dead, is in fact alive.

Their mother’s last wishes send Jeanne and Simon on an expedition in search of their tangled roots. Shifting back and forth in time, Incendies follows two parallel journeys—the twins’ and Nawal’s own life-changing search to find her son during a time of civil war and sectarian conflict. Through the juxtaposition of these two quests, Villeneuve crafts a powerful story of deep-rooted hatred, never-ending wars and enduring love. 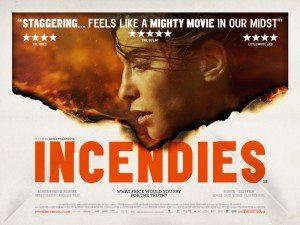 The Oscar nominated Incendies is released on DVD and blu-ray 12th September 2011 and to celebrate its release we are running a fantastic competition for three lucky people to win a DVD and a copy of the brilliant quad poster.

Competition Rules:
* The winners will be picked at random and contacted by Flickfeast.
* The Editor’s decision is final and binding on the entrants. No correspondence will be entered into.
* Closing date is Saturday 24th September 2011. The winners will be notified by email and must confirm and claim the prize within a week otherwise the prize will be redrawn.
* You must be registered on the site to enter so if you’re not already please register (it’s free)