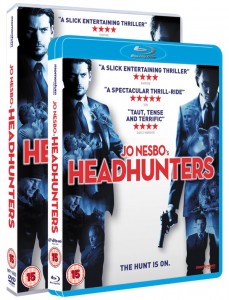 To celebrate the August 13th Blu-ray and DVD release of Headhunters we’ve got a Headhunters pack to give away consisting of the DVD, novel, and a t-shirt! Four runners up will win the novel and t-shirt!

From the producers of the original The Girl with the Dragon Tattoo and Wallander, this is the first of international best-selling norwegian author Jo Nesbø’s novels (The Snowman, The Leopard), to be adapted for the screen and is expertly directed by Morten Tyldum (Buddy, Fallen Angels) into a cool, brutal thriller. Much like the Girl trilogy, there is an American remake in the works which has a lot to live up to.

In HEADHUNTERS, Roger Brown (Aksel Hennie) seems to have it all, an exceedingly beautiful wife and a luxurious villa and is a high flying, successful corporate headhunter. He’s the best in the business and he knows it. But one career is not enough to fund Brown’s extravagant lifestyle and he becomes embroiled in high profile theft on the side, relieving his wealthy new recruits of their valuable artwork. So when Brown discovers his latest candidate, the accomplished and handsome Clas Greve (Nikolaj Coster-Waldau) owns one of the most sought after paintings in the world, he sees a way out of his financial problems for good and embarks on his most dangerous heist yet. But nothing could prepare Brown for what he finds in Greve’s apartment and what follows is a dark and relentless game of cat and mouse, as the hunter becomes the hunted.

For your chance to win simply answer this question:

Headhunters is released on Blu-ray, DVD, and to download on August 13 from Momentum Pictures.

Competition Rules:
* flickfeast is the promoter of the competition
* Competition is open to UK residents only
* The winners will be picked at random and contacted by flickfeast.
* The Editor’s decision is final and binding on the entrants. No correspondence will be entered into.
* Closing date is 27th August 2012. The winners will be notified by email and must respond within a week otherwise the prize will be given to someone else.
* The prizes can take a couple of months to reach the winners
* You must be registered on the site to enter so if you’re not already please register (it’s free)