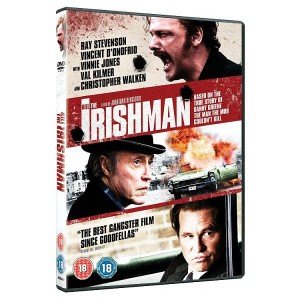 Over the summer of 1976, thirty-six bombs detonate in the heart of Cleveland while a turf war raged between the fearless Irish mobster Danny Greene (Ray Stevenson, Thor, The Book of Eli, The Punisher, King Arthur) and the Italian mafia.

Based on the astonishing true story, Kill The Irishman chronicles Greene’s heroic rise from a tough Cleveland neighbourhood to become an enforcer in the local mob.

Turning the tables on loan shark Shondor Birns (Christopher Walken) and allying himself with gangster John Nardi (Vincent D’Onofrio), Greene stops taking orders from the mafia and pursues his own power. Surviving countless assassination attempts from the mob and killing off anyone who went after him in retaliation, Danny Greene’s infamous invincibility and notorious fearlessness eventually led to the collapse of mafia syndicates across the U.S. and also earned him the status of the man the mob couldn’t kill.

Kill The Irishman is out on DVD and Blu-ray 26th September 2011 from Anchor Bay Home Entertainment. Courtesy of Anchor Bay we have three DVDs to giveaway. To be in with a chance of winning simply answer this question…

Competition Rules:
* The winners will be picked at random and contacted by Flickfeast.
* The Editor’s decision is final and binding on the entrants. No correspondence will be entered into.
* Closing date is Monday 10th October 2011. The winners will be notified by email and must confirm and claim the prize within a week otherwise the prize will be redrawn.
* You must be registered on the site to enter so if you’re not already please register (it’s free)