Win I Melt With You DVDs 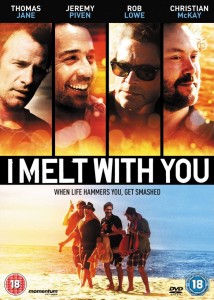 Featuring an ultimate 80’s punk and new-wave soundtrack, I MELT WITH YOU is released on DVD and to Download by Momentum Pictures on 6 August 2012. When life hammers you, get smashed, is the mantra of four friends on their annual reunion.

This dark side of the hangover features a solid selection of songs to show you exactly what taste in music the guys had. Things kick off with the one-two punch of “All Going Out Together” and “Blue Thunder” by Big Dipper and Galaxie 500 respectively. From there things get funkier with the classic “Maggot Brain” by Funkadelic, before The Jesus And Mary Chain arrive with the undeniable “Just Like Honey“. The staggering string of songs continue with “Caribou” by The Pixies, “All We Ever Wanted Was Everything” by Bauhaus, “Dog Eat Dog” by Adam And The Ants and the title track by Modern English.

The music featured in I Melt With You plays a big part in the film as the title reference to Modern English’s 1982 single suggests. The story of four male friends who stage a weekend reunion each year is pegged to the songs they loved in their youth, that being in the early ’80s, and so the songs chosen for use in the film tend to be drawn from that era. The lyrics communicate the movie’s themes, such as Big Dipper’s “All Going Out Together” and Bauhaus’ “All We Ever Wanted Was Everything“. The occasional outlier appears, none farther out than all ten minutes of Funkadelic’s 1971 psychedelic guitar freak-out “Maggot Brain” and the remake of “I Melt With You” is much slower implying that the friends’ lives are not as exciting as they used to be…

I MELT WITH YOU is released on DVD on 6 August, and courtesy of Momentum Pictures we have 3 DVDs to giveaway. To be in with a chance of winning simply answer the following question…

Competition Rules:
* flickfeast is the promoter of the competition
* Competition is open to UK residents only
* The winners will be picked at random and contacted by flickfeast.
* The Editor’s decision is final and binding on the entrants. No correspondence will be entered into.
* Closing date is 17th August 2012. The winners will be notified by email and must respond within a week otherwise the prize will be given to someone else.
* The prizes can take a couple of months to reach the winners
* You must be registered on the site to enter so if you’re not already please register (it’s free)