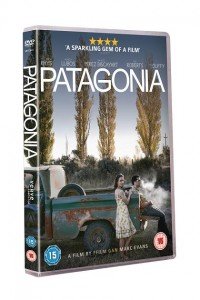 Patagonia, Marc Evans’ (My Little Eye) visually stunning and inspirational film about the journey of two women, one looking for her past and the other for her future, will be released on DVD & BLURAY 11th July. Starring Matthew Rhys (Edge Of Love and Brothers & Sisters) and Grammy Award winning singer Duffy, in her acting debut, Patagonia is a truly original film with dialogue spoken in both Spanish and Welsh. The impressive international cast also includes Nia Roberts (Solomon & Gaynor), Nahaul Perez Biscayart (Glue) and Marta Lubos (Motorcycle Diaries).

Incorporating the culture and countryside of both Wales and Patagonia, Evans’ impressive film is a lyrical

exploration of the parallel journeys of two women at very different stages of their lives. Cutting between their stories, in which one travels South to North through the Welsh springtime and the other East to West through the Argentine autumn, Patagonia is a film of intimate moments that play out against the sweeping panoramic landscapes, complemented by the hauntingly beautiful soundtrack, including songs from Duffy.

Both journeys must eventually come to an end both literally and metaphorically and the film’s poignant climax is as heartbreaking as it is uplifting. A road movie for romantics, Patagonia is at its heart a love story, an oldlady’s love for her roots and a young couple finding out if they are supposed to be together.

Patagonia is out on DVD and blu-ray 11th July 2011. Courtesy of Verve Pictures we have three copies to giveaway. Because we’ve been feeling a little insecure lately and in need of some attention we’re going to make this a facebook competition so all you have to do to enter the comp is show us a little love and ‘like’ us on our facebook page. Those that have already kindly ‘liked’ us on facebook will be entered into the draw automatically (there’s the love right back at yer).