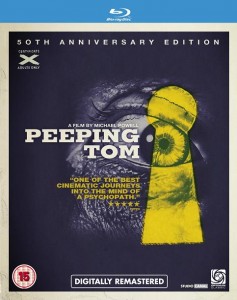 From Michael Powell, the acclaimed director of A Matter of Life and Death and The Red Shoes, Peeping Tom (reviewed here) was, upon its release, one of the most controversial films ever made in Britain – a masterpiece of psychological terror.
By day, Mark Lewis (Karlheinz Böhm) works as a modest focus-puller in a film studio. But he also shoots glamour photographs for a seedy Soho newsagent, and by night he seeks victims for his most gruesome obsession – filming the face of mortal fear, moments before death.  Written by British cryptographer and playwright Leo Marks, Peeping Tom also stars Moira Shearer, Anna Massey, Shirley Anne Field and real-life Glamour Queen Pamela Green and was shot by celebrated Director of Photography Otto Heller (The Queen of Spades, The Ladykillers, Victim).

Peeping Tom was released in 1960 shortly before Hitchcock’s equally shocking Psycho, and provoked British critics to a fury of disgust: ‘the sickest and filthiest film I can remember seeing’ (The Spectator); ‘stinks more than anything else in British films’ (New Statesman); ‘Frankly beastly’ (Financial Times); while Tribune wanted it ‘flushed swiftly down the nearest sewer’.

Powell’s career never recovered from the scandal. But twenty years later, Peeping Tom was hailed as a misunderstood masterpiece – especially by filmmakers such as Martin Scorsese, who submitted the film to the New York Film Festival in 1979 and helped finance a US re-release, allowing it to be rediscovered by a new audience. Today its wit, beauty and power see it rightly celebrated as a classic.

In celebration of its 50th Anniverary Optimum Releasing are bringing Peeping Tom back to the big screen on 19th November and it will be released on blu-ray 22nd November. Courtesy of Optimum Releasing we have 3 blu-rays to give away. Simply answer the following question..

Competition Rules: You must be 15 or over to enter. The competition closes on 22nd November 2010 and you must be registered on the site to enter so if you’re not already please register (it’s free)!