Win This Must Be the Place DVDs & Posters 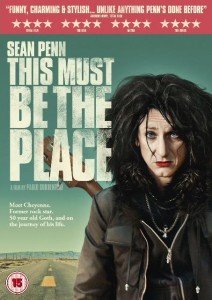 Learning his father is close to death, he travels to New York in the hope of being reconciled with him during his final hours, only to arrive too late. Having been estranged for over 30 years, it is only now in death that he learns the true extent of his father’s humiliation in Auschwitz at the hands of former SS Officer Aloise Muller – an event he was determined to avenge. With the help of Nazihunter Mordecai Midler (Judd Hirsch) Cheyenne decides to pick up where his father left off, and embarks on a life-altering journey, at his own pace, into the heartland of America.

As his quest unfolds, and reawakened by the people he encounters, Cheyenne must finally decide if it’s redemption he seeks or revenge.

This Must Be The Place boasts a fantastic soundtrack created by David Byrne and Will Oldham and will be released on DVD and blu-ray 13th August 2012. Courtesy of Trinity, we have three copies of the DVD and posters to give away. To be in with a chance of winning a DVD and poster simply answer the following question…

Competition Rules:
* flickfeast is the promoter of the competition
* Competition is open to UK residents only
* The winners will be picked at random and contacted by flickfeast.
* The Editor’s decision is final and binding on the entrants. No correspondence will be entered into.
* Closing date is 31st August 2012. The winners will be notified by email and must respond within a week otherwise the prize will be given to someone else.
* The prizes can take a couple of months to reach the winner
* You must be registered on the site to enter so if you’re not already please register (it’s free)