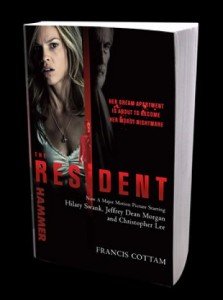 To celebrate the March 11th release of Hammer’s latest spinetingler The Resident, starring Hilary Swank, Jeffery Dean Morgan and Sir Christopher Lee, we’re giving you the chance to win one of three copies of the novelisation of the film.

Every year, several million single women in America move into an apartment. They don’t know who lived in the apartment before them, they don’t know their landlords, and they don’t bother to change the locks.

This is the story of one such woman…

After separating from her adulterous husband, the beautiful and young Dr. Juliet Devereau (Swank) moves to Brooklyn, NY and settles into a new life in a stunning and spacious loft apartment that seems too good to be true. Mysterious occurrences lead her to suspect she is not alone in her home and quickly her fears become all too real. In a chilling revelation, she discovers her seemingly charming, young landlord, Max (Morgan), has developed a dangerous obsession with her. Unknown to both of them, Max suffers from Borderline Personality Disorder. A terrifying game of cat and mouse ensues as Juliet is forced to fight and free herself from Max’s increasingly sinister intentions.

To be in with a chance of winning a copy of the book, just answer this question:

For more on The Resident, visit www.facebook.com/theresidentmovie

Competition Rules:  The competition closes on 19th March 2011 and you must be registered on the site to enter so if you’re not already please register (it’s free)! Winners will be notified via email once the draw has been taken and the winners must claim their prize within a week otherwise a replacement winner will be drawn.