Win Season of the Witch Blu-rays 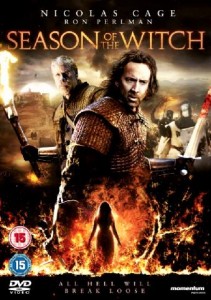 From the distributor that brought you the box-office-breaking The Girl with the Dragon Tattoo comes this supernatural action adventure starring Nicolas Cage as the knight charged with fighting the greatest evil known to man.

From one danger zone to another, a returning knight (Nicolas Cage) and his comrade (Ron Perlman) are thrust on a perilous and action-filled journey that will push them to their limits. As they uncover the dark secret of a cursed girl (Clare Foy) and engage in battle with a mighty and sinister force, the fate of the world rests in their hands.

After years of brutal warfare in God’s name, a heroic knight (Nicolas Cage) and his closest aide (Ron Perlman) return from the Crusades drained of their taste for bloodshed and disillusioned by the Church. The knight arrives to find his homeland shattered by the Black Death, and having returned from fighting prematurely, both men are apprehended and forced to embark upon a dangerous mission to avoid prison for desertion. The knight is instructed to take a prisoner of the church, an accused witch thought to be responsible for the Plague, to a monastery where she will undergo a ritual to free their lands of her curse. Fearing her to be a scapegoat, the knight agrees to accompany her. But their route is treacherous, taking them across sheer-walled gorges and into the punishing depths of wolf-infested forests, and as the knights fellow travellers begin to succumb, one-by-one, to misfortune, it becomes apparent that his most terrifying enemy yet is much closer to home.

Oscar®-winner Nicolas Cage (Gone in 60 Seconds, Drive Angry 3D) fronts a distinguished cast in this supernatural action adventure, with Ron Perlman (Hellboy) as his worthy co-star and Claire Foy (The Promise), who gives an outstanding performance as the troubled girl Anna. Joining them are Robert Sheehan, Ulrich Thomsen, Stephen Campbell Moore, and Stephen Graham as Cage and Perlman’s fellow travellers, and Christopher Lee as Cardinal D’Ambroise.

Season of the Witch is out on DVD and blu-rays 27th June, courtesy of Momentum Pictures we have 5 blu-rays to give away. To be in with a chance of winning just answer the following question…

Entry to this competition ended on July 9, 2011

Competition Rules:  You must be 15 or over to enter. The competition closes on 9th July 2011 and you must be registered on the site to enter so if you’re not already please register (it’s free)! Winners will be notified via email once the draw has been taken and the winners must claim their prize within a week otherwise a replacement winner will be drawn.

2010 SEASON OF THE WITCH DISTRIBUTIONS, LLC. ALL RIGHTS RESERVED.