Win The Secret In Their Eyes DVDs 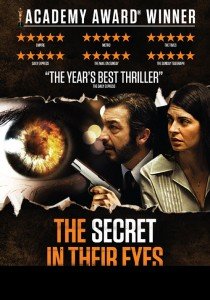 Having garnered high critical praise and earned over half a million pounds at the UK box office, this year’s breakthrough foreign language film, THE SECRET IN THEIR EYES (reviewed here) comes to DVD 10th January 2011.

For 25 years, a murder case has remained indelibly etched on lawyer Benjamín Espósito’s mind. Now retired, he decides to return to the story and in doing so take another look at a past full of love, death and friendship. But those memories, once unlocked and replayed a thousand times over, will change his view of the past and rewrite his future.

Bringing together breathtaking camera-work with a tightly woven plot, THE SECRET IN THEIR EYES is one of the most mesmersing mysteries of recent times.

Courtesy of Metrodome we have 3 DVD to give away. Simply answer this question…

Competition Rules: You must be 18 or over to enter. The competition closes on 19th January 2011 and you must be registered on the site to enter so if you’re not already please register (it’s free)!