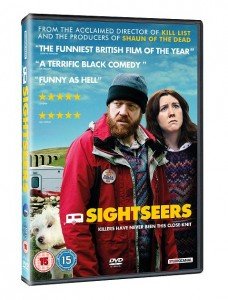 Chris (Steve Oram) wants to show Tina (Alice Lowe) his world and he wants to do it his way – on a journey through the British Isles in his beloved Abbey Oxford Caravan. Tina’s led a sheltered life and there are things that Chris needs her to see – the Crich Tramway Museum, the Ribblehead Viaduct, the Keswick Pencil Museum and the rolling countryside that accompanies these wonders in his life. But it doesn’t take long for the dream to fade. Litterbugs, noisy teenagers and pre-booked caravan sites, not to mention Tina’s meddling mother, soon conspire to shatter Chris’s dreams and send him, and anyone who rubs him up the wrong way, over a very jagged edge…

We have three copies of the DVD to giveaway. For your chance to win answer the following question…

Competition Rules:
* flickfeast is the promoter of the competition
* Competition is open to UK residents only
* The winners will be picked at random and contacted by flickfeast.
* The Editor’s decision is final and binding on the entrants. No correspondence will be entered into.
* Closing date is 28th March 2013. The winners will be notified by email and must respond within a week otherwise the winners will be redrawn.
* You must be registered on the site to enter so if you’re not already please register (it’s free)