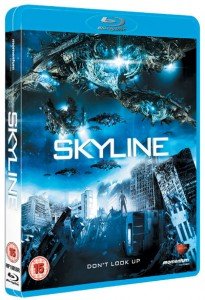 Skyline is a terrifying journey into our fear of the unknown, a high-velocity, special effects bonanza that resonates with feelings of urban panic in these dangerous times. Visual-effects masters The Brothers Strause (AVPR: Aliens vs. Predator—Requiem)—whose company Hydraulx has imagined visual effects for Avatar, 2012, Iron Man 2, The Curious Case of Benjamin Button and 300—have directed, produced and financed a spectacular and chilling independent film of epic proportions.

A group of friends are awakened in the dead of the night by a strange, eerie light beaming through their apartment window. Like moths to a flame, a disturbing blue light is throwing the people of Los Angeles into a trance, drawing them outside before a terrifying extraterrestrial force swallows them off the face of the earth. The city streets are empty, the phones are down and TV stations broadcast HD news feeds of nothing but empty chairs. In a matter of hours, we will all be gone.

For Jarrod (Eric Balfour) and Elaine (Scottie Thompson), a simple weekend away to visit friends Terry (Donald Faison) and Candice (Brittany Daniel) becomes a nightmare. As they watch in terror from Terry’s penthouse windows, people across the city are swallowed into massive alien ships that have blotted out the L.A. skyline: life as they know it is finished. With the military struggling to keep the aliens at bay, now it will take every survival instinct they have to elude capture from the thousands of monstrous creatures that are sweeping the city and searching for all humans in their path. From tankers to drones and hydra-like extraterrestrials, the aliens are inescapable and seemingly indestructible.

Skyline is out on DVD and Blu-ray 21st March, courtesy of Momentum picture we have 5 DVDs to giveaway. To be in with a chance of winning a DVD of this great film simply answer this question…

Competition Rules: You must be 15 or over to enter. The competition closes on 21st March 2011 and you must be registered on the site to enter so if you’re not already please register (it’s free)! Winners will be notified via email once the draw has been taken and the winners must claim their prize within a week otherwise a replacement winner will be drawn.

Thompson signs on for ‘Men In Black III’