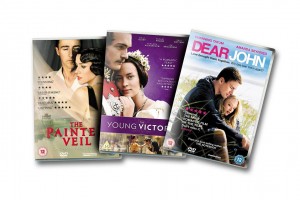 Searching for a soulmate? Or do they even exist?

To celebrate the release of Vanessa Paradis’s new film CAFE DE FLORE, in cinemas on 11 May, Momentum Pictures are offering a soulmate-themed DVD bundle of THE YOUNG VICTORIA, THE PAINTED VEIL and DEAR JOHN.

From the director of C.R.A.Z.Y and The Young Victoria comes a love story about people separated by time and place but connected in profound and mysterious ways. Atmospheric, fantastical, tragic and hopeful, the film chronicles the parallel fates of Jacqueline (an award winning performance by Vanessa Paradis), a fiercely devoted single mother and her young son Laurent in 1960s Paris, and Antoine (Kevin Parent), a successful DJ in present day Montreal, balancing the demands of his career with his responsibilities towards his new love, Rose, his daughters and his ex, Carole (Helene Florent); who still harbours a secret belief that Antoine, her soulmate, will return to her.

A box office smash in Canada where the film was nominated for 13 Genies (Canada’s Oscars) winning 3 awards, including Best Actress for Paradis, CAFE DE FLORE boasts a nostalgia-filled soundtrack including The Cure, Pink Floyd, Sigur Ros and Matthew Herbert, and is an elegant, emotionally grown-up drama which captures the complexities of relationships, exploring forces we seldom acknowledge, and even more rarely understand.

To enter this competition all you have to do is show us a little love and ‘like’ us on our facebook page. Those that have already kindly ‘liked’ us on facebook will be entered into the draw automatically.

Competition Rules:  You must be over 12 to enter, The competition closes on 25th May 2012. 1 winner will be drawn at random from our facebook followers. Winner will be notified via facebook once the draw has been taken and the winner must claim their prize within a week otherwise a replacement winner will be drawn. The prize can take a few months to be delivered.