The Woman in Black is undoubtedly the British cinematic success story of 2012, with a box office topping a staggering £21 million and audiences across the country left in no doubt that the film is a shock fest that has to be experienced to be believed. 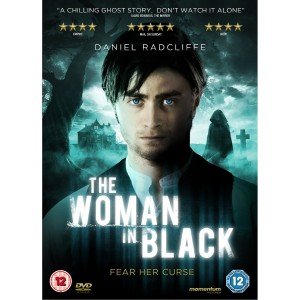 Set for release on Blu-ray, DVD and digital download on 18 June 2012, The Woman in Black is the most successful British horror film of all time and stars Daniel Radcliffe in his first feature film since the Harry Potter franchise of movies came to an end.  Based on the book by Susan Hill and with a screenplay by Jane Goldman (Kick-Ass, X-Men:  First Class, Stardust), The Woman in Black will undoubtedly scare away all competition as it storms to the top of the home entertainment charts.

To celebrate its release, we are running a fantastic competition to win the DVD and a merchandise bundle pack! To be in with a chance of winning these great prizes answer the following question…

Competition Rules:
* flickfeast is the promoter of the competition
* Competition is open to UK residents only
* The winner will be picked at random and contacted by flickfeast.
* The Editor’s decision is final and binding on the entrants. No correspondence will be entered into.
* Closing date is 4th July 2012. The winner will be notified by email and must respond within a week otherwise the prize will be given to someone else.
* The prizes can take a couple of months to reach the winner
* You must be registered on the site to enter so if you’re not already please register (it’s free)

Treehouse: An Interview With Steve Weston