One of the best things about the HD revolution is the ability to watch classic movies in crystal clear quality with stereo sound. Whilst DVDs still remain popular, Blu-ray has well and truly established itself as the medium of choice for those who want to experience movies in the best way possible. Below are 5 classic titles that are available to buy on Blu-ray now.

If you want to enjoy the movies below in the best quality possible then be sure to check out the range of DVD and Blu-ray players available from Toshiba.

The Shawshank Redemption is a firm favourite amongst both critics and the public, and it currently tops the IMDb Top 250 films list. When it was first released in 1994, The Shawshank Redemption was overlooked by many people and only gained its status as a cult classic through the VHS rental market. As the years have passed, the movie has established itself as a true classic and it’s now available to enjoy in HD quality thanks to the Blu-ray release.

Considered by many to be the greatest movie of all time, The Godfather is exceptional in every way. The movie tells the story of New York crime family, the Corleone’s, and features a stellar cast, including a young Al Pacino as Michael Corleone. There a few films in cinema history that have had such an impact on audiences as The Godfather and you can now experience it in HD by ordering The Godfather Coppola Restoration Blu-ray. 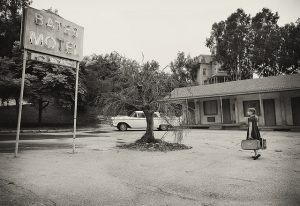 Ask anybody to name one Alfred Hitchcock movie and they’ll almost certainly say ‘Psycho’. When it was released in 1960, it was like nothing else showing and its infamous shower scene has become one of the best-known scenes in movie history. It’s truly incredible to see a movie that was made more than 5 decades ago in true HD quality – and for old school scares, Psycho cannot be beaten.

With the second instalment of the incredibly successful reboot of the Planet of the Apes franchise now in cinemas, what better time to enjoy the original classic from the 60s that started it all. The original Apes movie, staring Charlton Heston, might seem quite tame and innocent when compared to modern sci-fi releases but it still has enough charm and great ideas to make it a very enjoyable watch.

You can buy the original Planet of the Apes movie as a limited edition Blu-ray steelbook or you can get the entire original series as a boxset from Amazon.

It’s hard to believe that it’s been over a decade since the last instalment when the Lord of the Rings trilogy was released in cinemas. There have been very few films released in the last 20 years that received the amount of hype and adoration as the Lord of the Rings movies and the stunning visuals in the hugely popular franchise make them a perfect choice to buy on Blu-ray.