Now THIS is how you do a remake. Taking the premise from 13: Game Of Death and using it as a framework for a mix of humour and nastiness, director Daniel Stamm (who also co-wrote the screenplay with David Birke)  does his utmost to please both fans of the original film and newcomers alike.

Mark Webber is the man having a bad day. A very bad day. Within the first few scenes of the movie viewers see him lose his job, fend off various people demanding payments, placate his handicapped brother (Devon Graye), and suffer insults from his angry, racist father (Tom Bower). While driving around in the evening, he receives a phone call that tells him he can win some big prize money if he kills the fly that is buzzing around him. That is only the first of thirteen challenges, but each one gets more difficult, and more valuable, than the last. If he sticks with it, however, then all of his worries will be over. If he decides to back out then he gets nothing. Backing out gets harder with every cash reward earned, but getting to the end will take a strong stomach.

Webber is very good in the lead role, instantly likable and nicely led down a slippery slope that viewers will start to feel uneasy about as soon as he starts receiving phone calls with challenge instructions. Graye is also very good, and Rutina Wesley does well to make any kind of impression, considering the fact that she’s the black, pregnant fiance of the main character, there to maintain his determination more than anything else (although nobody can know that he is taking part in challenges for prize cash). Thankfully, she’s able to come across as a sweet, loving partner, making the audience dislike Bower’s character even more. Bower is also very good, by the way, and it’s always good to see Ron Perlman and Pruitt Taylor Vince in genre fare. The two men have some fun here. 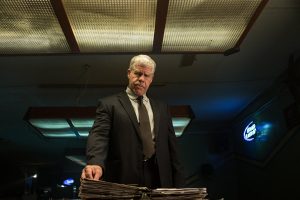 Stamm has a couple of films under his belt now, including that certain exorcism movie that a lot of people loved and I really disliked, and this shows that he’s someone worth keeping an eye on in the coming years. Although this isn’t exactly a straight horror film, it’s not often played for laughs either. There’s humour in the mix, but it’s occasional stuff that allows people to relax slightly after tense moments.

The screenplay may have an air of familiarity about it, and not just because it’s based on an earlier movie, but this is a movie that’s all about the journey as opposed to the destination. If you can’t work out where things are going within the first third of the film then you’ve not been paying attention. It’s mostly quite predictable. But when surprises pop up they’re executed perfectly, including a set-piece in the final third that really delivers the gory goods for those who like that kind of thing (and I do sometimes like that kind of thing).

Even if you try to avoid remakes, and I don’t blame you for that stance, then I’d advise giving this one a watch. It’s the same, but different.