Venice over the summer has many things going for it if you can look past the swarms of tourists and sweltering temperature. There’s a reason people flood there from all over the world, although flood might not be the best word to use for a city prone to so many of them. But for all the historic grandeur, there’s one highlight that can’t be missed. Starting on 27th August, the 71st edition of the world’s oldest film festival kicks off offering eleven days of cinematic pleasure.

Firing the starting gun for the 2014 awards season, this year’s festival has a healthy dose of American and Italian films with a wide range from the rest of the world mixed in as well. But with too many to catch, what must you make sure not to miss?

The opening film, also competing in the main competition, promises a strong start. Birdman, the latest from Alejandro González Iñárritu, stars Michael Keaton as a faded actor who attempts a comeback on Broadway. The stellar cast also includes Edward Norton, Emma Stone, Zach Galifianakis and Naomi Watts but it’s the unhinged looking Keaton who threatens to steal the show as the man once famous for playing a superhero who’s now fallen on hard times.

Elsewhere in the main competition several old favourites turn up with new efforts. Fatih Akin returns to fiction film for the first time in 5 years with The Cut. Based on the Armenian Genocide, a young man played by Tahar Rahim is deported from his village before embarking on a journey around the world to find his daughters who may still be alive. There’s also a new feature from the iconic Swedish director Roy Andersson, only the fifth in a career that first began decades ago. A Pigeon Sat on a Branch reflecting on Existence, the title a reference to a painting by Pieter Bruegel the Elder, promises to be as odd as ever. There’s also more from the likes of Xavier Beauvois (La Rançon de la Gloire), Wang Xiaoshuai (Red Amnesia) and The Look of Silence, Joshua Oppenheimer’s latest documentary following The Act of Killing. 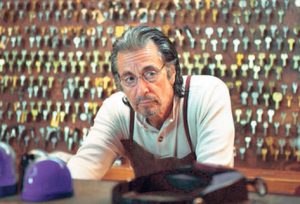 The US and Italy are particularly well-represented in the race for the Golden Lion. America has the likes of David Gordon Green’s Manglehorn starring Al Pacino as the ex-con Texas locksmith who never got over the love of his life. There’s also Good Kill, Andrew Niccol’s drama about Ethan Hawke’s drone operator and Ramin Bahrani’s housing bubble film 99 Homes. On the Italian side, Adam Driver pops up on the big screen yet again in Saverio Costanzo’s drama Hungry Hearts while Anime Nere offers a look at crime in Italy through the eyes of three brothers. And of course Abel Ferrara, hot on the heels of Welcome to New York earlier this year, is also in contention with Pasolini, his biopic of the distinguished film director, poet and writer starring Willem Dafoe.

It’s not just the main competition that offers up a range of enticing prospects though. Other films premiering at Venice this year include James Franco’s latest Faulkner adaptation, The Sound and the Fury, Peter Bogdanovich’s Lubitsch style comedy She’s Funny That Way starring Owen Wilson, Barry Levinson’s adaptation of the Philip Roth novel The Humbling and Cymbeline, Michael Almereyda’s latest take on Shakespeare that reimagines Dakota Johnson, Ethan Hawke (again) and Milla Jovovich in a battle between corrupt cops and a biker gang.

Outside the bigger American feature films there’s the complete HBO mini-series, Olive Kitteridge, starring Frances McDormand and the director’s cut of Volume 2 of Lars von Trier’s controversial Nymphomaniac. If you’re looking to go a little more offbeat, Ulrich Seidl’s documentary, In the Basement, takes a tour through the hidden rooms of Austrian families finding all manner of odd things along the way. And if you think it’s all sounding a little too European, Hong Sang-soo is bringing Hill of Freedom before Ann Hui’s The Golden Era closes the festival. And long as the list of the films above may be, that’s just a small sample of what’s showing at the Venice Lido from 27th August to 6th September this year. So pick carefully and enjoy and don’t forget to check back here throughout.