By far the funniest moment in Adore, Anne Fontaine’s farcically po-faced, cross-Oedipal ménage-à-quatre drama, follows Roz (Robin Wright) and Lil’s (Naomi Watts) discovery that each woman has slept with the other’s son. “What have we done?” asks Roz, like one of those scientists in B-movies who learn that their work has enabled the villain to create an Earth-obliterating nuclear device. A long, pensive silence. “We’ve crossed a line“, comes Lil’s thuddingly sincere reply. I could fill an entire review with zingers like these – it has more than Airplane! – but that would be too easy. Nevertheless, to suggest that Adore has worse dialogue than an airport paperback would be not only an insult to bad literature, but also trees and airports. 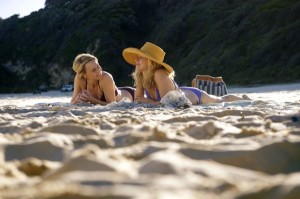 The film begins with Roz and Lil as little girls, frolicking in the ocean near their home in coastal Australia. A turgid transition shot glides around Roz’s head to reveal a now-middle-aged Naomi Watts at the grave of her husband, and both women with young sons. Another twelve years pass when the boys go out surfing and crash beneath the waves, rising for air as men in their twenties (Roz and Lil, on the other hand, haven’t aged a day). Lil’s son Ian (Xavier Samuel) reveals his attraction to Roz after a dinner party, and they sleep together unaware of her son Tom (James Frenchville) as witness. Naturally, he goes off to bonk Lil the very next day. From here two intensely passionate affairs emerge, or at least they would if Fontaine’s evocation of intense passion weren’t inspired by a bilious potpourri of Agony Aunt columns and frumpy, bourgeoise novellas. 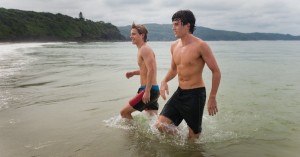 There’s an interesting, if blunt suggestion at the film’s start that these affairs mask a latent homoeroticism; as the women laugh off an accusation from workmates of being secret lovers (“we’re not lezzos!”, screeches Watts), the feeling lingers that Roz and Lil are really fucking each other’s offspring as a way of fucking each other, a taboo that would likely see them ostracized by a hermetic, small-minded coastal community. Their friendship weathers this revelation to become stronger, only deepening the suspicion that each woman is only searching for a deeper way in to the other – in fact, a birds-eye view of the foursome lounging out on a timber raft could survive any number of rearrangements. But this idea isn’t so much underdeveloped as it is leant against a wall and promptly shot by Christopher Hampton’s inane screenplay, whose oh-so-French lilt throws up every other taboo it can think of with little sensitivity, and a late-in-the-day lurch toward incest confirmed only that he and Fontaine were performing a cowardly dance around their core subject of repressed lesbianism and the poisonous effect that denial can have on relationships.

The development of Adore’s synchronized sexual pas de deux between mothers and sons, which later expands to involve the boy’s new girlfriends, also frustrates, leaving nothing to the imagination and signposting every revelation several scenes before they happen, often in a gale-force wind of clumsy exposition and hyper-literal psychology (which also extends to the portentous framing, especially a two-shot which foregrounds Robin Wright against Watts wailing on the edge of a bed, obviously beckoning towards Bergman’s Persona). In one scene, watching their sons catching waves, Lil declares, “They look like young Gods“, single-handedly spelling out the film’s thesis and dramatic arc from this point. 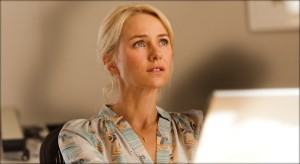 Its increasingly prevalent discourse on age is also an irrelevant folly in the face of two gleaming Hollywood stars – when a close-up of Watts staring into the mirror is meant to reflect the dissatisfaction she has with her looks, and the worry that Tom will become turned off by her wrinkles, we can only laugh at the sheer inanity of this soap opera burlesque featuring one of the most beautiful women in the world. As it stacks up on contrivances the film’s laughs come thicker (much thicker) and faster, with a six-way argument at its end (“I’m leaving!”; “Go on then!”) coming off like a wonky misstep between Neighbors and some wicked Buñuelian manners-of-the-bourgeoise satire. One couldn’t have made a better parody if they’d tried, I thought, and Fontaine would do well to admit her arrant lack of effort as premeditated to ward off seemingly justified claims of incompetence. Merde.

My Top Ten Most Anticipated Movies of 2012