There is a fatal weakness undermining Gibney’s film. It is not really about Armstrong’s lie. Instead, it is the tale of his 2009 comeback in the Tour de France. Hired to make that documentary, circumstance has since thrust Gibney into a different story. Skilled filmmaker though he undoubtedly is, it doesn’t quite come off. Too much time is dedicated to his return from retirement. Much of The Armstrong Lie is that original film right down to the stirring music as he surges triumphantly through the field. Everything else has been tacked on to react to the subsequent doping revelations. 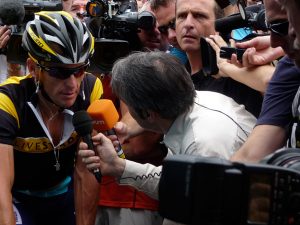 Some of the additions work very well. The contrast between the 2009 footage and the damning interviews in which a succession of his former colleagues and journalists confirm his guilt is particularly effective. Gibney, given astonishing access by the Armstrong camp, can also return wryly to some of the rare interviews he was able to procure, particularly the controversial doctor Michele Ferrari, said to be the man responsible for running Armstrong’s doping programme. But Gibney’s own voiceover inadvertently sets the tone, that of a man desperately trying to make up for being duped in the first place.

Too many avenues are opened and left unexplored. Armstrong’s ruthlessness in hiding his secret and his willingness to crush any whistle blowers makes for fascinating viewing. But potential links between the UCI and doping are given a passing mention and then ignored. Personal relationships go unexamined while his family life and charity work is side-lined, granted only the occasional mention. Gibney did manage to gain a direct interview with Armstrong the day after he finally came clean on Oprah, his haggard face a stark contrast to the aggressive 2009 model, but the mask stays in place. This is about as close as anyone has got to a revealing portrait of the most controversial sportsperson of recent times, but it pulls up frustratingly short. 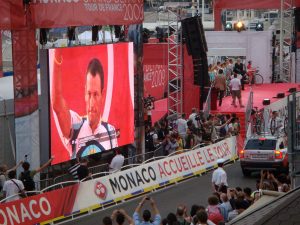 A faint taste of what could have been is left lingering in the air. That 2009 comeback film would have served up a great slice of uplifting entertainment had events not rendered it obsolete. The new version reveals a lot about the world of cycling but Armstrong remains a taciturn enigma. And yet Gibney does manage to evoke a pervasive sadness. The final word belongs to the brief scene in the cancer wards. Armstrong, for all his flaws, brought hope. The loss of this is the most devastating victim of his lie.

The Armstrong Lie is in cinemas 31st January 2014.