While an unconditional hatred of multiplex horror can be fostered by experiences with empty industry fare (Paranormal Activity, Insidious), I can’t remember a supernatural film since Session 9 (2001) that has sank its tendrils so deep within my psyche. The Total Film sponsored flick and most hyped film of the festival was the Australian horror / art-house flick The Babadook , writer / director Jennifer Kent’s perfect combination of compelling story, perfectly judged scares and dynamite performances.

Dealing with the death of her husband, Amelia (Essie Davis) struggles with her troubled young son Robbie (Daniel Henshall), an odd child plagued with nightmares and a fetish for making his own crude but effective booby traps. After a pop – up book named ‘The Babadook’ mysteriously finds its way into Robbie’s bedtime reading, his nightmares and bad behavior intensify leaving Amelia isolated from friends and Robbie skipping school. Trapped together with a malevolent force growing in their collective minds, Amelia’s own psychological condition deteriorates forcing a sinister change in the family dynamic and as the Babadook’s wraith like shadow spreads and its power grows both mother and son must face this unnamed fear before it threatens to consume them both. 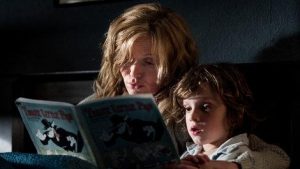 From the sinister pop-up book of the films title to the incredible performances of Essie Davis and Daniel Henshall, the films sense of atmosphere is pitch perfect, building dread and building it masterfully to a terrifying climax. In the tradition of the ‘less is more’ school of horror, the few appearances of the titular monster make its presence off screen just as intimidating as when it rises in its full form, a tall cloaked almost German expressionist silhouette, glitching through time and space with some of the most frightening sound design I have ever experienced.  In the tradition of the best supernatural films, obvious sub textual themes hinted at throughout by director Kent suggest that grief is the real monster here, creating a sense of realism to the outlandish horror which anyone who has lost themselves in the grieving process should powerfully relate to.

While the trailer for The Babadook pitched the film as event film of unparalleled scares, the resulting product was superbly acted, beautifully constructed and a surprisingly mature horror, foregrounding character over cheap scares and solidifying itself as an archetypal example of horror with longevity. As an exploration of redemptive love, psychological dread and closeted monsters for once the PR journalese of ‘Gruffalo meets Repulsion’ was absolutely spot on. When the Babadook does come knocking at your door upon wider release very soon, please don’t hesitate to let him in. You won’t regret it.