Outragers of public decency – those ones who don’t overdose or blow their own brains out – have a habit of winding up as pillars of the community. Mick Jagger is a knight of the realm; Johnny Rotten makes butter commercials and Conan the Barbarian governed the state of California. 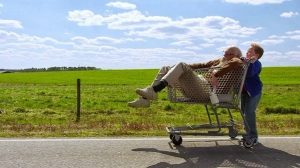 For all we know Bad Grandpa might mark Jackass Johnny Knoxville’s first step in an equivalent transformation: here he moves from gross-out stunts and extreme physical self-jeopardy to tamer (but still gross) stunts wrapped in a comedy narrative. Other than the one he left in the corner of a Nashville diner – I won’t spoil it for you, but be sure to have dinner before you watch – I’m not sure what other mark it will leave. 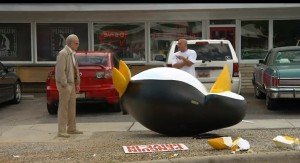 For his idea Knoxville is heavily indebted to at least three films: Billy Bob Thornton’s Bad Santa (reprobate gets saddled with dopey kid); Alan Arkin’s Little Miss Sunshine, (mischievous old-timer and kid on the road trip of a lifetime); and Sacha Baron Cohen’s Borat (the standing template for confronting the baseness of Middle America with its own image). 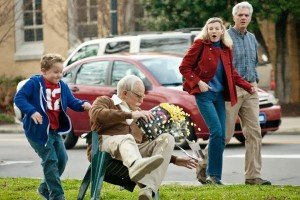 Bad Grandpa is a paler reflection of each. The one thing you would not expect a Jackass production to do is pull punches. But Grandpa Knoxville isn’t as bad as Santa, he isn’t as outrageous as Grandpa Sunshine, and he fails to land a blow on Middle America: his marks (some of whom, you sense, are plants) come away looking thoroughly decent, innocent victims of a mean-spirited deception. 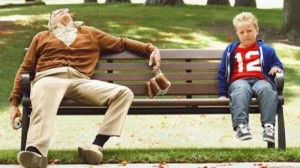 This might have been his objective, but the appeal of a film whose vibe is “look what a jerk I can be to these nice people” is hard to see.

There are hilarious moments, to be sure, though you could save yourself a tenner and see three quarters of them on the trailer. But they are interleaved with long periods of slow and clumsy exposition. 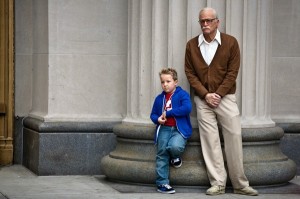 The standout performance is Knoxville’s young accomplice Billy (Jackson Nicoll) channelling Bud Bundy for all he’s worth. Nicoll could be an 8-year-old John Goodman, both by looks and in his natural timing and execution.

Where this leaves Knoxville is less obvious. He may yet burn out, or wind up governor of Tennessee, but on the strength of Bad Grandpa, fading away looks a fair option.