Frederick Wiseman’s documentary, At Berkeley, his 38th institution-based film, is by far the longest documentary at this year’s London Film Festival. It is also, I think fair to say, probably going to be one of the best. For a documentary with no immediate narrative drive (more on this later) and at a whopping 244 minutes it is remarkable that the film never drags; indeed, the four hours fairly flew by and at the end of it, I was so immersed that another hour wouldn’t have been too much of a stretch.

For the last forty-plus years Wiseman has been documenting, in intimate detached detail, American institutions and, by extension, America itself. Films such as Public Housing, High School, Aspen, and, more recently, Domestic Violence and Boxing Gym have shown us, through their insistence on detailing procedure and personality, just how America works, at the most fundamentally official and administrative level, through the exposure of the interaction between the institutional forces of the country and the individuals that they exist to serve. 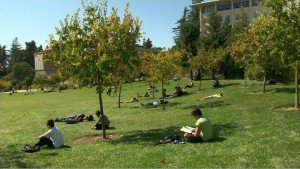 The clue to the success of this film, one of the few of Wiseman’s to be set in a specific, explicitly named institution, lies in the title. “AT” Berkeley could so easily have appeared an extended, however interesting, advert for the university, or even as part of an ongoing, intensive recruitment drive (which could have made sense having now seen the film) but the addition of that little occupational preposition indicates fully Wiseman’s intentions here: the University itself is merely the background to (or battleground on which) lectures and administrative meetings vie for our attention and lay bare the struggles and hopes of both the students (American and, more increasingly, foreign) and the University staff as they continue their research and teaching/studying amidst ever increasingly untenable financial circumstances. And Wiseman places us right there, At Berkeley, though we get the impression that, initially, this could be any public university in the country. That this anonymity dissipates in the second half of the film does not mean that Wiseman’s focus shifts more definitely towards Berkeley the named place, but rather towards an era in American history that not only gave rise to the notion of the student-led public protest, but indeed Wiseman and his project itself.

It is Wiseman’s genius as both a researcher and an editor that this shift occurs as effectively as it does. Having approached then Chancellor of Berkeley, Robert Birgeneau (one of only two or three recurring subjects in the whole film) to film at Berkeley, Wiseman and his regular cameraman John Davey (working for the second time in HD) embedded themselves on campus for three or four months and filmed literally hundreds of hours of footage. Wiseman has always been very honest about manipulating films narratively during the edit, creating what he once called ‘fictional reality’, though he has since suggested he may want to distance himself from the term; he even holds the phrase cinema verite in a certain disregard (it being a “pompous French” term) and the flow of the film adheres to a very definite editorial grammar, and unfolds naturally and chronologically. 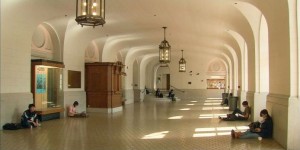 It has taken 4 decades for Wiseman to return to where it all began for him with Titticut Follies (and for Berkeley, with widespread public student mass-action and political protest): the 1960s. Both turned out to be based so much on the ideals of free speech, community and a desire for state-driven and accessible public education, and indeed it is this that forms the thematic backbone of the film.

For the first 2 hours of At Berkeley we are shown alternating, lengthy shots (with the odd individual close-up) of administrative university staff meetings (during which Birgeneau and his team attempt to drag Berkeley out of the financial mire) and various university lectures (whether they be about governmental policy, the poet John Donne or classroom techniques) and each academic lecture and hypothetical student discussion scene seems to perfectly illustrate the very real and practical problems being dealt with by the faculty in the scene preceding it. Inserted between these illustrative (and incredibly engaging and informative) sequences are much shorter shots of the university itself (scenes of landscapers laying cement, or shots of students playing Frisbee on the lawns) which break up the flow of the film and indeed even themselves are often used as examples and cases in point. 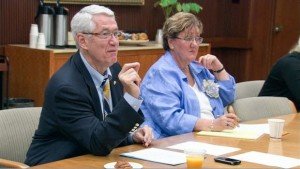 The second half of the film is given over to what initially appears to be, and is filmed in the style of, the legendary Berkeley protests of the 60s. And though we are never told, the fact that the times (as Dylan said) have a’changed is unavoidable. Despite whatever we hear from the students, the problems facing them and Berkeley have long since ceased to be political and are only even social in as much as the financial needs must. That the sit-in in the library ends peacefully (and is bizarrely calm) and that Birgeneau seems to hold the protesters (especially the speaker, who merely comes across as self-serving and anamnetic) in a certain contempt merely goes to show how financial need breaks down all barriers of race, class, education and future.

Apart from the brief history we are given of the University during what is presumably an induction lecture at the beginning of the film, and all of the facts and figures and projected targets and short-falls during the staff meetings, Wiseman gives us absolutely nothing (as ever) outside of the frame by way of history, context or authorial voice. In the usual non-partisan, non-participatory Wiseman method, there is no narration in At Berkeley. Nor indeed is there an interviewer or any indication whatsoever (apart from the unavoidable knowledge of the presence of the camera and our own initiative and intuition) of what is happening on screen over and above what is actually happening on screen, and this throws us into the diegetic reality of the university fully, requiring of us that we not only concentrate, but concern ourselves fundamentally with the issues at hand. It could all get so overwhelming for those to whom American history and society is of little interest, though it should be. But then, Wiseman is likely, and apt, to assume that viewers who do not already know of Berkeley and its ideals seek information for themselves. This is very much a film that requires listening to, and is rewarding in every possibly respect. 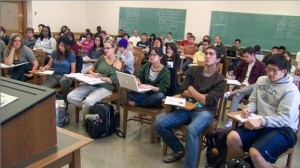 And what is at stake here is the fate of an American institution, being public tertiary education (and hence, necessarily, of America itself) and Wiseman doesn’t give us a solution. Perhaps there isn’t one. Perhaps there is.

Wiseman’s films, unlike other documentaries, are not the process of documentation. Rather, they are the documents themselves. Wiseman’s previous institutional films (and now At Berkeley), are the primary documents of America.

At Berkeley was screened as part of the 57th London Film Festival at the ICA, with Frederick Wiseman in attendance.