At the 7th London Russian Film Festival, critically-acclaimed director Taisia Igumentseva’s first feature-length film Bite the Dust gave the opening night a distinctly Russian flavour. Igumentseva, who won the Cannes Festival Cinefondation 2011 First Prize for her first feature, uses a premise predominantly inspired by one of Russia’s most renowned films, Tarkovsky’s final film The Sacrifice (1986). The notion of ‘the apocalypse that never happens’ is not unfamiliar to Russian cinema, nor to traditional Russian theatre. While the small agricultural Russian community are shaken by the news that 90% of all life will be wiped out by apocalyptic magnetic storms, Bite The Dust is described primarily as a comedy, and it certainly retains the distinctive tragicomic voice of Russia’s greatest playwright, Chekhov. 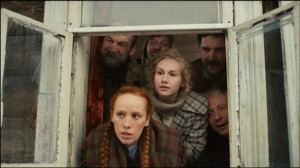 Igumentseva, for a young 24-year-old, demonstrates an acute understanding of human relationships and the human condition. Her film is as much about pre-apocalyptic preparation as it is about what happens when the world doesn’t end. Granny Zina’s pre-apocalyptic remark, that ‘we haven’t even lived yet, and now this!’, is evocative of the melodramatic Irina from Chekhov’s Three Sisters. What happens when you wait all your life for things to change, and then things end? But things don’t end, and this narrative trait alone cements Igumentseva’s film as a continuation of the legacy of Chekhov and Tarkovsky. Its characters sit around the table eating the pies they have prepared, waiting to die. This typically black aspect of Russian comedy – the crushing of expectations however dark these expectations are – defines its tragicomic tone. 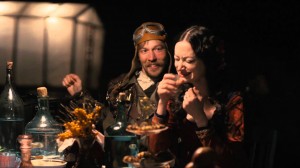 When the apocalypse doesn’t happen, Bite the Dust begins to develop a Tarkovskian denouement. However, where Tarkovsky’s protagonist is forced to sacrifice his voice, his family, and his home in order to save those he loves, Igumentseva’s characters are initially only concerned with saving themselves. Senya and Nastya find the strength to leave their respective partners and run away together, Nina finds the strength to leave behind the memory of her dead husband, and Granny Zina finds the strength to tell the other inhabitants what she really thinks of them.

And yet, once these characters are secure in the knowledge that the apocalypse will not happen, some of these decisions prove to be less gratifying than they had originally hoped. Senya and Nastya are shot sitting despondently side-by-side in front of Nastya’s original wedding photo, in which the happy couple are pictured looking equally sombre. Her new relationship is as stilted as her old one, and it seems that rather than spurring these characters to make the changes that will benefit their lives, the threat of apocalypse has made them realise, ultimately, that they were happiest the way they were before. 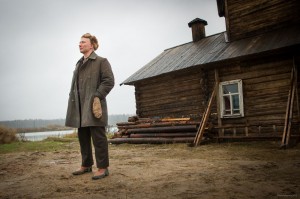 The same cannot be said for Nina. When she awakens in the morning, with the implication of having had an affair, she is lit up like a cheap Madonna, with an electric-light halo emanating around her head. After realising she has sacrificed her fidelity to her dead husband, she has an epiphany and decides to abandon his memory for her own happiness. Similarly, Nastya’s husband is cast as a Christ figure, sacrificing his home and his happiness for his wife and her new lover, and driving his truck into a telegraph pole erected in the shape of the Cross. The irony, however, is that he lives to survive the ordeal, ambling back into the village and requesting to stay in his neighbour’s houses. 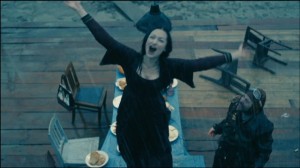 In many respects, the post-apocalypse is as much a religious epiphany as it is a parody. The ‘Great Flood’ that the village encounters sees Granny Zina trapped inside her house, being rescued by the neighbours in a floating out-house. The parallel between Noah’s ark and the toilet in which Granny Zina and her self-proclaimed status as a piece of ‘shit’ are contained is as amusing as it is poignant. The flood washes away the sins, the hidden tensions, and the unrealised self-fulfilment which plagued this small community, leaving blank snow, and a blank sheet upon which each character can start again. Senya and Nastya return to their respective partners, while Nina comes to realise that she must move on from her husband’s death.

The ending of Bite the Dust marks a departure from the tragicomic Russian tradition in which Igumentseva’s film is embedded. A rare Russian happy ending marks a new chapter for Russian film, in which happiness is realised – not in Chekhov’s ‘Moscow’, not in Tarkovsky’s notion of ‘sacrifice’, and not in the relationships that these characters contrive in order to fulfil themselves – but in the basic comfort of family, community, and human relationships.