Blue Velvet remains, for me, the greatest movie that David Lynch has ever produced. Oh, Twin Peaks remains his finest achievement, but Blue Velvet is the forerunner to that magnificent TV show. It’s the film that has best married his obsession with Americana, and the darkness that lurks behind some of those white picket fences, to a truly dreamlike atmosphere caught on film. Lost Highway, Mulholland Drive and other Lynch movies also do a great job, but Blue Velvet remains the quintessential celluloid nightmare. 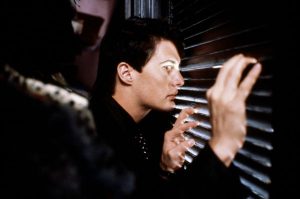 It all starts with Jeffrey Beaumont (Kyle MacLachlan) returning to town after his father is hospitalised. Jeffrey is drawn into a big mystery when he finds a human ear while wandering through a field, and he enlists the assistance of a young woman (Sandy Williams, played by Laura Dern) to help him conduct an amateur investigation. Their suspicions lead them to a singer named Dorothy Vallens (Isabella Rossellini), which in turn puts Jeffrey in danger as he comes into contact with a psychotic named Frank Booth (Dennis Hopper).

There are too many individual highlights in this movie for me to list, but anyone who has seen Blue Velvet (and I think of it as essential viewing for film fans) will have a number of scenes already seared into their minds. It’s a skip and a jump through Hell, and Hopper is, at times, akin to the devil himself.

The fact that MacLachlan and Dern are both slightly stilted and artificial in their performances only adds to the dreamy quality of the movie. The two may be playing Jeffrey and Sandy, respectively, but they’re also portraying a modern day version of Hansel and Gretel, wandering too far into the forest while the breadcrumbs are being removed behind their backs. Rossellini, although often overshadowed by the events around her, gives a great performance, at times heartbreaking and at times frightening. And then there’s Hopper, giving a performance that has been dissected and praised so much over the years that anything I might have to add would seem like spitting into the ocean. Needless to say, he’s phenomenal in this. 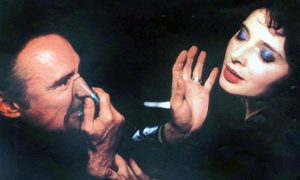 Other people appear, with Dean Stockwell another standout, but the true power of Blue Velvet comes from Lynch, with his blending of strange visuals and great audio work (including a great score by Angelo Badalamenti) turning these unsavoury ingredients into one of the finest cinematic feasts in modern cinema. The mystery at the heart of the movie is a simple one, but that’s not the focus of the film. It’s just a launching pad for a journey that Jeffrey and Sandy will embark on. A journey that will show them things they can never unsee, and remind everyone involved of the rot that can lie in every shadow.

It could be said that every David Lynch movie is very much a “director’s movie”, but Blue Velvet is the best example of that, in my opinion. It’s sometimes self-indulgent, but in all the right ways, and the pieces of the puzzle aren’t quite as difficult to put together as they become in his later movies, but it’s clear that the director has had a LOT of fun putting everything together in between the few set-pieces. Thankfully, many film fans have just as much fun watching the end result.