Adele (magnificently portrayed by Adèle Exarchopoulos) is a teenage literature student coming to terms with her sexual identity, as well as who she wants to be in life, when a brief exchange of a glance with striking tomboy Emma (Léa Seydoux) alters her life forever. 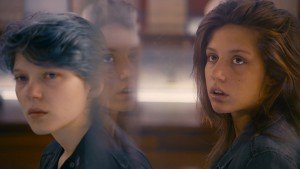 Blue is the Warmest Color manages to avoid clichés and does not feel like a polemic. Instead it offers a tender portrait of adolescence and growing up and the people we become because of the relationships we are in. We really go on a journey with the character of Adele over several years, and it is one all of us will be able to relate to in one way or another.

An abundance of close ups and handy camera work allows us to feel right there with the characters; experiencing a first kiss and a first sexual encounter. The camera pours over the female form, be it flesh, paint or stone, and conversations arise on the pleasures of being a female. Women are the heart and soul of this film, but it never feels like it is alienating men and I wonder what male spectators will make of this. Interestingly, the film is directed by a male, so perhaps the gaze is more male than it at first appears. 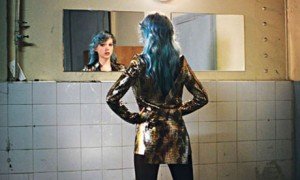 There is a recurring motif of blue throughout the film; from Emma’s blue hair when Adele first meets her, to the striking blue dress that Adele wears at the end of the film, which becomes a significant turning point for the character. Along with the literary and cultural references throughout the film, Blue effectively balances narrative with poetic connotation and allows the audience to interpret what they want from this rich realm.

Adèle Exarchopoulos is magnetic as Adele and is both believable as a teen studying literature and a young woman working as a teacher. She doesn’t often say what she is feeling, instead we see her thoughtful and unsure gaze and slightly open pouting mouth which Exarchopoulos manages to use in a multitude of ways to depict a variety of emotions. Physical details such as her nervously adjusting her messy up do make Adele all the more endearing and she becomes a character we want to spend a lot of time with. As always Seydoux oozes charisma in an understated manner and successfully captures the complexities of human nature, showing a character that is not altogether likable at times, but still commands our attention. Seydoux has already established herself as an actress to watch, particularly in Ursula Meier’s Sister (2012), but her role in this film will certainly take her to the next level of stardom. 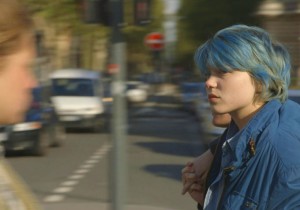 The film’s explicit sex scenes have had quite a lot of attention in the press, but these are not gratuitous, instead they depict the passion, attraction and connection between these two women and the scenes are deservedly given extensive screen time. In this day and age this should not be a bold move in cinema, but unfortunately, some people may be surprised by these raw scenes, be it for whatever reason. Kechiche directs honest sex scenes that show Adele’s sexual education and physical connection with Emma and the two actresses do a stupendous job at acting these out believably. 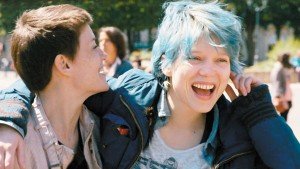 Ultimately the film is an exploration of love and the raw passion that two people can find between one another. Considering its rather long runtime, Blue successfully creates a world we want to be in, with characters that are fascinating, in situations that are tender and we can all relate to. A film I will revisit again and again.

Blue is the Warmest Color is out in cinemas on 22nd November 2013.